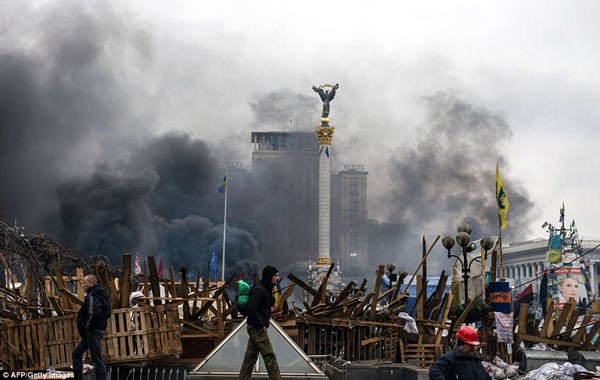 The Ukrainian Embassy in France called the movie, The Masks of the Revolution, a pamphlet made according to the worst traditions of misinformation, and appealed to the leadership of the broadcasting channel to take it off the air.

The Ukrainian Embassy in Paris asked the board of directors of the French TV channel Canal + to cancel the screening of the film, The Masks of the Revolution, which depicts the events on the Maidan in February of 2014. The film is scheduled to be aired on February 1st. In a statement published on the Facebook page of the Ukrainian diplomatic mission on Sunday, January 31st, it was stated that the movie, directed by Paul Moreira, "gives a false representation of the situation in Ukraine."

The Ukrainian Embassy called the interpretation of the events in Ukraine made by the authors of the movie "music to the ears of conspiracy theorists and pro-Russian propaganda." "The Masks of the Revolution," the statement said, is "a pamphlet made according to the worst traditions of misinformation" using "primitive methods of manipulative journalism, including - manipulation of comments, distorted translations and invented facts."

"An attempt to explain the events in Ukraine only as a result of the actions of the U.S. is not only dishonest, but also completely disrespectful to our citizens who died in the center of Kiev trying to protect the democratic aspirations of the country," the published statement stated.

In the summary, posted on the official website of the French TV channel, the documentary is presented as a special investigation. The viewer is invited to learn about the "extreme right-wing armed groups supported by Washington" and the "massacre in Odessa that was committed by Ukrainian nationalists." "Paul Moreira takes the mask off modern Ukraine in an investigation against the backdrop of a new Cold War between the East and the West," the summary says.

Canal + hasn't yet responded to the appeal of the Ukrainian diplomats.