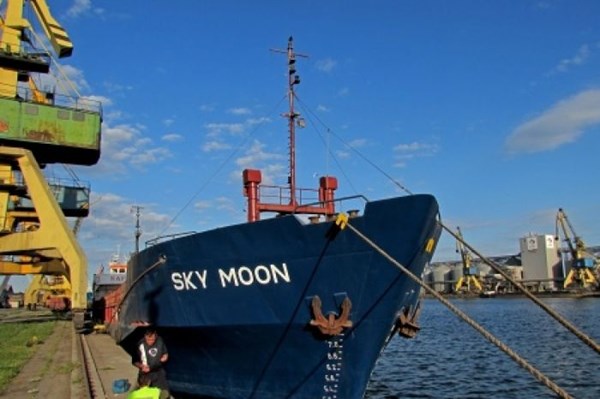 The Malinovsky District Court of Odessa convicted the captain of the vessel Sky Moon, which sailed under the flag of Tanzania, for illegally entering a port in the Russian-annexed Crimea, as reported on the website of the military prosecutor's office of the Southern region.

The court decided to confiscate the goods that were being smuggled, namely, soda worth almost 18.5 million UAH (or 687 thousand USD), and the ship itself, as the vehicle that was used to commit the offense. The worth of the confiscated vessel wasn't indicated. It was noted that this is the largest batch of goods confiscated as a result of customs violations in Ukrainian history.

The military prosecutor's office also intends to prosecute the captain, one of the founders of the company that owns the cargo - a Moldovan citizen, and possibly, a representative of the ship’s owner - a Romanian citizen.

"Based on the results of the investigation, the military prosecutor's office will inform the Czech authorities about the violation of European sanctions by a legal entity registered in its country which engaged in prohibited trade with the annexed territory," the report says.

After the annexation of the Crimea by Russia, Ukrainian law enforcement agencies detained four vessels that illegally entered the ports of the Crimea. Overall, over 600 boats were registered in the ports of the peninsula during this time, including 260 foreign merchant ships, according to LB.ua. However, law enforcement employees do not always detain vessels in Ukrainian ports that have visited the Crimea illegally.