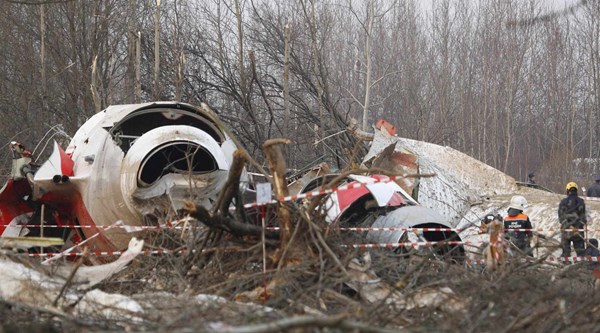 Poland again demands that Russia return the wreckage of the presidential airliner Tu-154, which crashed near Smolensk in 2010. The corresponding diplomatic note was sent to Moscow, the Polish Foreign Ministry said on Friday, April 10. "There is no rule of international law that gives Russia grounds to hold Polish property," the Polish Foreign Minister stressed.

Warsaw has honored the victims of the plane crash. Polish Prime Minister Mateusz Morawiecki and the Chairman of the ruling Law and Justice party Jaroslaw Kaczynski, brother of the deceased president, laid wreaths at the monument to the victims of the tragedy. Mass commemorative events in the country are not held because of the COVID-19 pandemic.

In January 2011, the Interstate Aviation Committee (IAC), published a report on the crash investigation, according to which the pilots were responsible for the catastrophe, since they rejected the advice to go to an alternate airport, despite the unfavorable weather conditions. The inadequate qualification of the crew is stated to be the indirect cause of the crash.

A commission led by former Polish defense minister Antoni Macierewicz refuted the theory that the pilots were to blame. According to a report presented in the Polish Sejm, there was an explosion in the plane’s left wing at an altitude of roughly 900 meters. Just before the landing strip, there were several emergencies, and then, while the plane was still in the air, an explosion in the aircraft’s fuselage. Furthermore, the commission determined that the operators in Smolensk gave the Polish Tu-154 crew incorrect information for landing.

The commission also ruled out the possibility that Polish Air Force General Andrzej Błasik was in the cockpit during the landing approach.

Macierewicz said that the technical report, which, according to him, does not yet reflect the official stance of the Polish government, has been given to the Prosecutor General’s Office, which is conducting its own investigation into the aviation catastrophe.

Russia has been unwilling to send the aircraft fragments and other physical evidence to Poland, claiming that the Russian investigation is not yet complete.