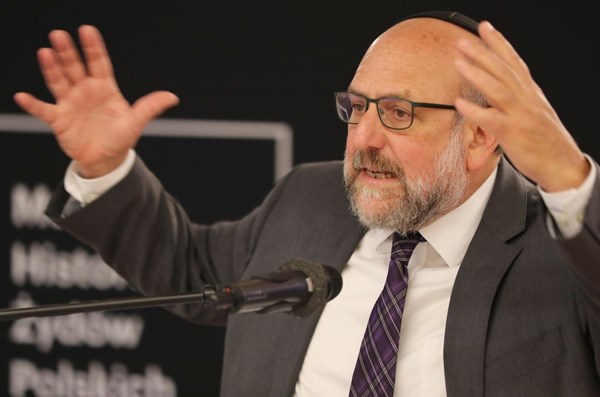 Klara Kołodziejska-Połtyn, president of the Union of Jewish Religious Communities in Poland, and Chief Polish Rabbi Michael Schudrich have responded to a statement by Russian President Vladimir Putin, in which he called the Polish diplomat Józef Lipski, who worked in Nazi Germany, an “anti-Semitic swine”. Extracts from their comments were published by the Polish newspaper Rzeczpospolita.

Kołodziejska-Połtyn and Schudrich called Putin’s statements “outrageous”. “Recently Russian President Vladimir Putin made a number of outrageous statements about the causes of World War Two and Poland’s role in it. For us Jews, Putin’s manipulations of the memorandum of Polish Ambassador to Berlin Józef Lipski are particularly outrageous,” they said.

According to them, Poland supported the emigration of 10% of its Jewish population. It did this partially in cooperation with the Zionist movement, to which it secretly provided military support. When Hitler Germany expelled thousands of Polish Jews in 1938, the Polish diplomatic services, including ambassador Lipski personally, supported the Jews, note Kołodziejska-Połtyn and Schudrich. To accuse him of anti-Semitism on the basis of one sentence taken out of context is extremely irresponsible, they remark.

During a press conference on December 19, Putin said that Poland was also involved in the division of Czechoslovakia, and that Soviet troops entered Poland after the Polish government “lost control of its armed forces”, and in light of what was going on in the country. The Russian president later made sharp comments about Józef Lipski, the Polish ambassador to Nazi Germany, who was head of the Polish embassy in Berlin in 1934-1939. According to Putin, Lipski supposedly supported Hitler’s idea of sending the Jews to Africa. He was “a scoundrel and an anti-Semitic swine – there’s no other way to put it,” the Russian President remarked.