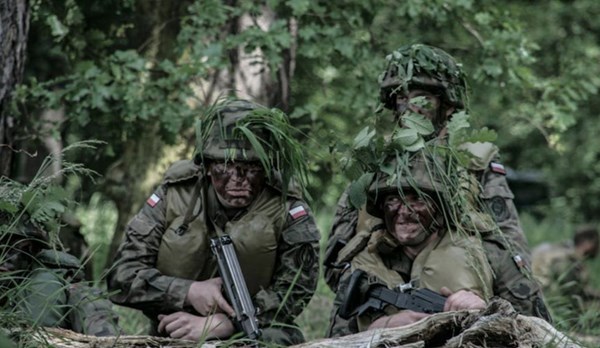 The Polish government has prepared an updated defense decree, which provides for a sharp increase in the number of the country's armed forces.

According to Poland Daily Live, the document will replace the military doctrine adopted in 1967, when Poland was part of the Soviet bloc.

According to the bill, the number of personnel in the Polish army  should double in the coming years  - from 150 to 300 thousand people, which will make it the largest in Europe. Cyber defense units will also be created in the Polish Armed Forces.

Deputy Prime Minister of Poland, Chairman of the conservative party Law and Justice Jaroslaw Kaczynski, presenting the project together with National Defense Minister Mariusz Blaszczak, said that Poland is located on the outer edge of NATO and the European Union and therefore "should have significant deterrence capabilities."

"And if necessary, it should be ready to effectively defend itself against an attack," Kaczynski said, adding that he hoped "this will never happen."

According to Kaczynski, the bill is designed to "radically" strengthen the Polish army in view of Russia's "imperial ambitions" and the "hybrid war" waged by the self-proclaimed president of Belarus, Alexander Lukashenko, who sends thousands of migrants from Africa and the Middle East to the Polish border.

The EU accuses Lukashenko of facilitating illegal migration in response to sanctions imposed after last year's presidential election, which were accompanied by of massive fraud and the subsequent brutal suppression of protests.

At the end of October, the Polish parliament approved the construction of a 100-kilometer fortified fence on the border with Belarus.

In recent weeks, Warsaw has deployed thousands of soldiers on the border, erected a barbed wire fence and declared a state of emergency in the border zone.

On Monday, November 8, the Polish government convened an emergency meeting due to the situation on the border with Belarus. The Minister coordinating the work of Polish special services, Stanislav Zharyn, called crowds of migrants gathered at the border an attempt to forcefully invade Poland.

Polish Deputy Foreign Minister Piotr Wawrzyk said that he is convinced that Lukashenko seeks an escalation that will lead to "fatalities on both sides."