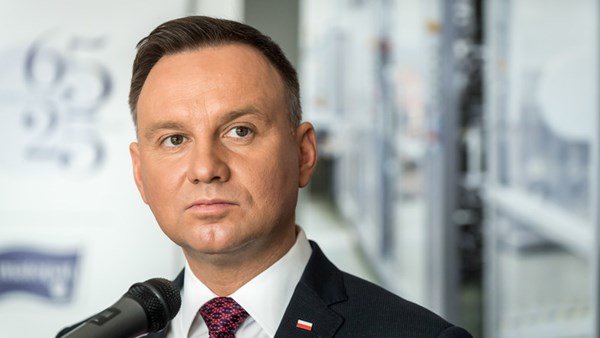 Polish President Andrzej Duda canceled a visit to Ukraine scheduled for April 13 due to the coronavirus pandemic, reported the press service of the Ukrainian Ministry of Foreign Affairs.

"The Ministry of Foreign Affairs of Ukraine reports that the visit of the President of the Republic of Poland Andrzej Duda to Ukraine to commemorate the Polish victims of the Katyn massacre will not take place due to the situation with the spread of coronavirus in the world," – said the Ukrainian Ministry f Foreign Affair as quoted by Ukrainsky Novyny..

On April 13, Duda was to visit Kharkiv, on the 80th anniversary of the Katyn massacre, when in April-May 1940 the NKVD of the USSR following the orders of Joseph Stalin shot 22,000 Poles in the Katyn Forest (Smolensk region of Russia) and a number of camps and prisons in Belarus and Ukraine, including Kharkiv.

The 70th anniversary of the Katyn massacre is linked to the death in April 2010 of Polish President Lech Kaczynski and nearly 90 Polish top officials in a plane crash at Smolensk airport, the cause of which has not been definitively established.

Duda was going to honor the memory of the victims of the Katyn massacre in Kharkiv. The detailed program of his visit to Ukraine was not announced.

The Foreign Ministry did not say whether the Ukrainian-Polish talks would take place on the planned date in any other format and whether Duda's visit to Ukraine was postponed to a later date.

In the first four years of his presidency Duda has visited Ukraine four times. At the same time, his last visit was accompanied by scandal. Then he could not agree with President Petro Poroshenko on a joint day of remembrance of the victims of the Volyn tragedy, and as a result, on July 8, 2018, Duda came to Volyn, and Poroshenko visited the Polish Sakhryn.