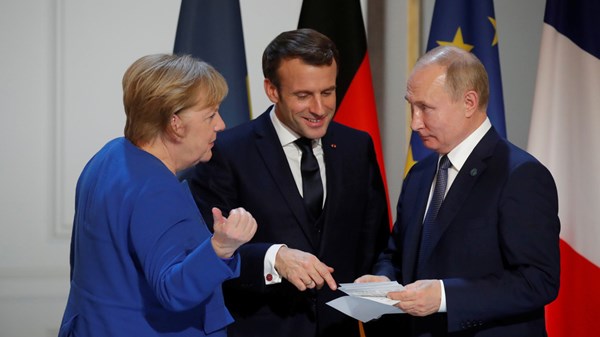 According to Peskov, the joint video conference of the leaders of Russia, France and Germany is not being prepared as an event of the Normandy Four. Peskov added that one of the topics of the talks will be the Donbas.

The exact date and time of the video conference is not yet available, the Kremlin spokesman said. "We continue to coordinate with Berlin and Paris. When there are firm results of the agreement, we will inform you," he said, answering journalists' questions.

"Our position is nothing about Ukraine without Ukraine," Ukrainian Foreign Ministry spokesman Oleh Nikolenko said in a commentary to Evropeyska Pravda.

Nikolenko reminded that negotiations on the settlement of the conflict in the Donbas are conducted in a Normandy format with the participation of the leaders of four states: Ukraine, Germany, France and Russia.

"We are convinced that only in the full, not abbreviated composition of Normandy Format, it is possible to achieve progress on the key issues of a peaceful settlement, first of all ensuring a full and comprehensive ceasefire," Nikolenko said.

"Amid the escalation of shelling of Ukrainian positions, the leadership of our country is now making active efforts to intensify the negotiations in the four-way format, both at the level of heads of state and at the level of political advisers of Normandy Four leaders," he added.

On March 9, Ukrainian President Volodymyr Zelensky said that if the meeting in the Normandy format does not take place, he will find an opportunity to meet with each of the leaders separately.