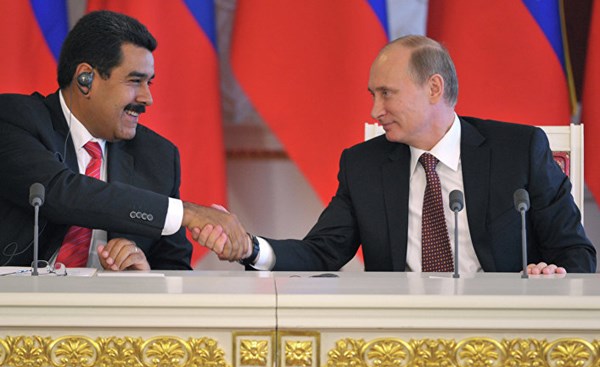 Russian President Vladimir Putin assured his Venezuelan counterpart Nicolas Maduro of Moscow’s full support in the struggle for power in Venezuela, and promised him continued assistance.

“Russia consistently supports all of Venezuela’s legitimate organs of government, including the institution of the president and parliament,” Putin said during the meeting with Maduro in Moscow, as cited by Deutsche Welle. He also expressed his support for dialog between Maduro and Venezuelan opposition leader and self-declared acting president Juan Guaido.

“Any refusal to engage in dialog we consider irrational, harmful to the country and nothing but threatening to the well-being of the population,” Putin remarked.

Maduro, in turn, said that Moscow and Caracas “have demonstrated their ability to overcome any difficulties together”.

Putin promised to continue shipping agricultural products to Venezuela and to expand the cooperation relating to medicine. He noted that Russia will soon be sending Venezuela 1.5 million flu vaccines, and is prepared to send up to 5 million on an ongoing basis. According to the Russian President, trade between the two countries has increased by 10% in the last few months.

The Russian President also referred to the major investment projects in Venezuela, pointing out that Russia has invested nearly $4 billion in its economy. He noted that the development of cooperation in the area of military technology is also “on schedule”.

Among other things, Russia has been sending Venezuela spare parts and creating centers for servicing Russian military equipment within Venezuela. The total value of such military technology contracts between the countries is an estimated $11 billion.

Nicolas Maduro and opposition leader Juan Guaido have been struggling for power for several months already. Roughly 50 countries have recognized Guaido as acting president. Maduro, on the other hand, is supported by the Venezuelan army, and considered the legitimate president by Russia, China and Cuba.

At the end of April, the political conflict in Venezuela grew more intense, and Guaido announced the beginning of the “final stage” of the deposition of Maduro, urging the army to side with him. US Secretary of State Mike Pompeo said that Maduro was ready to flee, but was stopped by Russia.