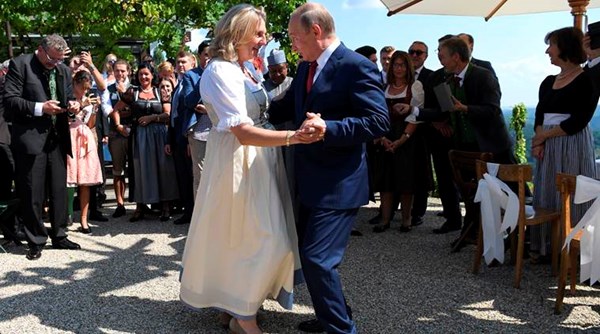 “Putin gave the newlyweds a painting with rural motifs, because her husband is from precisely these places, and he also gave an ancient butter squeezer and a Tula samovar,” Russian news agency TASS cites Peskov as saying.

The Russian president’s spokesman also said that Putin danced with “some of the guests” at the wedding, “including the bride”.

The atmosphere at the wedding ceremony was “relaxed and very warm”. Putin proposed a toast, expressing his “gratitude and pleasure at once again having the opportunity to visit hospitable Austria and such a picturesque place”. Putin said his toast in German, wishing the newlyweds “long years together, happiness and a family,” the presidential spokesman noted.

During the ceremony, the Russian president had a brief discussion with Austrian Chancellor Sebastian Kurz, Peskov reported. According to the Austrian TV channel OE24, Putin and Kurz also spoke shortly before the Russian president’s departure flight. Kurz and Putin left the wedding together.

The leaders of both countries discussed bilateral relations, including “problematic points” such as Ukraine and Syria, the TV channel claims. They also discussed energy policy and relations with the EU and US.

When asked how the Kremlin views the criticism of Putin’s visit to Austria, Peskov said that such criticism is “not perceived” in Moscow. “The decision [on Putin’s trip] was related to the fact that Mrs Kneisl invited the president to this wedding,” the spokesperson explained.

After the wedding, by 19:35, Putin had already arrived at Schloss Meseberg, the German government residence, where he had talks with German Chancellor Angela Merkel.