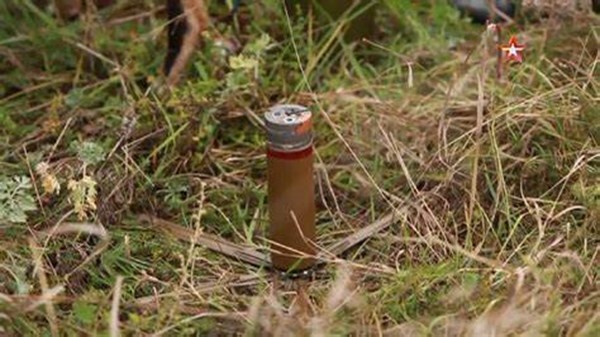 "The occupiers are mining Ukrainian land with their latest POM-3 Medallion anti-personnel mines. Cases of using mines with a seismic target sensor were recorded in the Kharkiv region. Russian invaders use them in remote mining of the region," Denisova stated on Telegram.

The mine is equipped with a seismic sensor that detects an approaching person and ejects an explosive charge into the air. The detonation can reportedly cause death and injury to individuals within a 16-meter radius. They are known to kill and main indiscriminately.

Russian forces reportedly laid the mines using the ISDM Zemledelie-I mine-laying rocket launcher, which can deliver the Medallion mines from up to 15 km away.

“Countries around the world should forcefully condemn Russia’s use of banned antipersonnel landmines in Ukraine,” said Steve Goose, the arms director of Human Rights Watch. “These weapons do not differentiate between combatants and civilians and leave a deadly legacy for years to come.”

The 1997 International Mine Ban Treaty “bans the use, production, stockpiling, and transfer of antipersonnel mines.” Russia is not among the 164 states that have joined the treaty. Ukraine signed the treaty in 1999 and became a state part in 2006.

In November 2020, Russia told the United Nations General Assembly that it “shares the goals of the treaty and supports a world free of mines,” but views antipersonnel mines “as an effective way of ensuring the security of Russia’s borders.”

“Russia’s use of antipersonnel mines in Ukraine deliberately flouts the international norm against use of these horrid weapons,” Goose added.