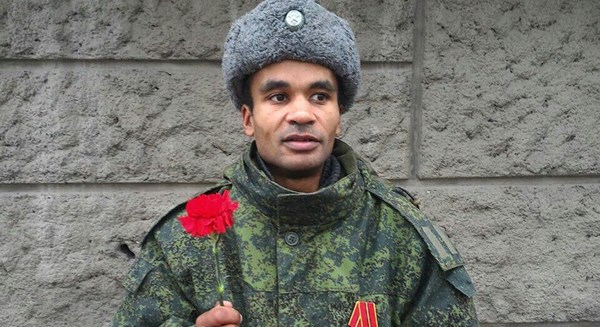 Beness Aijo is a Latvian national who studied in the UK and has spent several years fighting for the terrorists in eastern Ukraine.

Saraev said that the militant was arrested at around 7:30 PM in the town of Yarensk, where he had gone “to support the opponents of the construction of a waste disposal site in the village of Shiyes, to where solid household waste is meant to be brought from Moscow”.

“He’s a Russian, even though he has black skin. He’s wanted in the Baltics. He currently fights for the DPR. He’s a member of the DPR communist party. He was arrested by the police in the Arkhangelsk region at Ukraine’s request. They are threatening to extradite him to Ukraine,” Saraev said.

In 2014, the British media reported that one of the militants fighting in eastern Ukraine was the British Latvian Aijo Beness, a communist and member of Russia’s National Bolshevik Party.

Beness lived for a long time in London, studied at the Birkbeck university, and worked on the renovation of a terminal at Heathrow Airport. During the Ukrainian Revolution of Dignity, he was spotted in Kyiv among the anti-Maidan protesters.

In March 2014 during the developments in Crimea, he went to the peninsula to help the “green men”. In May, he was arrested on the Ukrainian border and deported to the UK.

“I was part of the self defense forces in Crimea. I had a military uniform and a weapon. But I did not shoot even once or cause anyone any harm. I never killed anyone, I just stood night watch near military facilities, my assignment was to maintain order,” Beness told the press.

Soon after his deportation, he returned, but this time to the Donbas, where he joined the separatists.