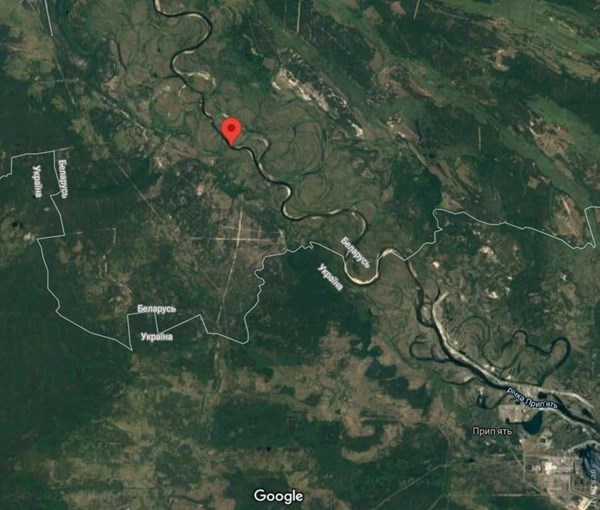 Russian military has built a pontoon bridge across the Pripyat River in the Chernobyl exclusion zone near the abandoned Belarusian village of Vepry, reports the news outlet the Insider. Satellite images show that the construction began on February 10, 2022. There was nothing at that site before. The distance from the Pripyat to Kyiv is about 150 km.

The work of the military in this zone was also confirmed by the Ministry of Defense of Belarus. According to the official version, the joint Russian-Belarusian exercises "Allied Resolve-2022" were held here.

"Motorized rifle units of the Russian Armed Forces practiced repelling an air attack of a hypothetical enemy, worked on survivability, withdrawing and capturing the defense positions , crossing a water barrier (the Pripyat River) at the Rečyca site, " the Belarusian Defense Ministry said in a statement on February 11.

The bridge significantly reduces the distance from the Belarusian city of Yampil to the border with Ukraine, since the Russian military would not have to make a detour. The bridge connects the road network directly, shortening the distance from 167 km to 96 km. Earlier, the 5th Tank and 37th Motorized Rifle Brigades from Buryatia were seen near Yampil.

As analysts of the Conflict Intelligence Team (CIT) explained to The Insider, the bridge can be used to transfer the military to the territory of Ukraine through the Chernobyl zone.

"We agree that the activity in this area is associated with the construction of a bridge, which is visible on Planet satellite images," CIT experts said. “Most likely, one of the pontoon bridges transferred from the Eastern Military District and later seen in the south of the Gomel region was used for this. On the one hand, the construction of this bridge corresponds to the legend of the exercises published by the Ministry of Defense of Belarus, which mentions the crossing of the Pripyat. On the other hand, it can be used to create another vector of offensive on the Kyiv region – through the Chernobyl exclusion zone."

Earlier, the official representative of the Russian Ministry of Defense Igor Konashenkov said that, on February 15, the Russian military will begin to return to the places of the permanent deployment. The units of the Southern and Western Military Districts were expected to leave the Belarusian training site Obuz-Lesnevsky. At the same time, the statement did not say anything about the troops currently in the Kursk, Belgorod and Bryansk regions.

After Konashenkov's statement, the TV channel of the Russian Defense Ministry "Zvezda" published a video in which the BMP-3 armored personnel carriers of the 136th motorized rifle brigade are loaded onto the railway car. The video‘s geolocation shows that it was shot at the railway station in Bakhchisarai (Crimea).

According to CIT analysts, there have been not noticeable changes "on the ground" after Konashenkov's statement. "Those remaining echelons that were on the way, all moved towards the border (and not away from it)," the CIT said. "Moreover, there are reports that new units are on their way to the border [with Ukraine], which can be additionally confirmed by videos showing cargo trains and data from the Russian Railways database."