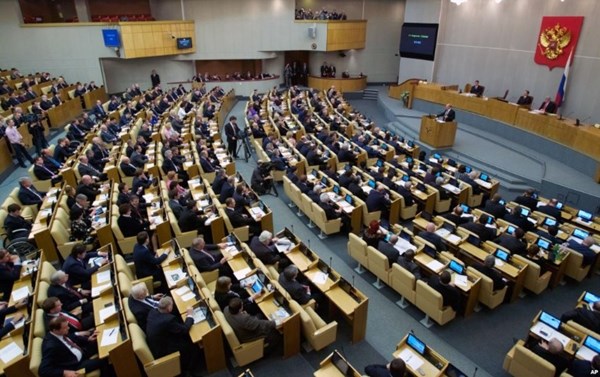 The draft bill of the Russian State Duma on measures in connection with "anti-Russian provocations in Georgia" has been published in the database of the lower house of Parliament.

Russian Deputies urge the government to consider whether special economic measures should be applied against Georgia and then submit recommendations to President Vladimir Putin.

Russian Deputies called protests in Georgia "open attacks of radical forces." According to them, the actions lead to deterioration of relations between Moscow and Tbilisi, reads the statement.

The state Duma refers to the Federal law "On special economic and restrictive measures," which regulates what sanctions the Russian authorities can impose against another country.

On Monday, Russia's lower chamber speaker Vyacheslav Volodin listed several specific measures that, according to deputies, the government should take: a ban on the import of wine and soda water from Georgia, as well as the ban on the cash transfers from Russia to Georgia.

The reason for the sanctions was the actions of the Georgian TV channel Rustavi 2 host George Gabunia, who on July 7 during the live broadcast spoke obscenely about Putin and his dead parents. The channel later apologized for the journalist's behavior. Official Tbilisi has also condemned the journalist for the profanity while speaking about Putin.

A new crisis in relations between Russia and Georgia began in June, when a Russian State Duma Deputy during his visit to Georgia, sat in the chair of the Chairperson of the Georgian Parliament. These actions provoked protests in Tbilisi and after that Russia decided to stop flights to Georgia.

According to the Central Bank, the volume of cash transfers of individuals from Russia to Georgia amounted to $631 million in 2018. Last year, Georgia supplied mineral and carbonated water to the Russian market in an amount of $59 million, and wine in an amount of $117 million.