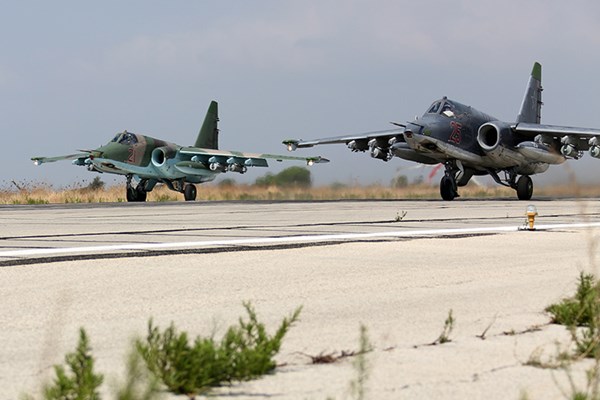 Su-25 assault aircraft from the Russian military base in Kyrgyzstan will be involved in joint trilateral exercises on the Tajik-Afghan border, scheduled for August 5-10, Interfax reports with reference to the press service of Russian Central Military District.

During the exercises, the aircraft will reinforce more than a thousand Russian troops and tanks, who will be training in "destroying a conditional enemy" when crossing the border.

During the drills, the Su-25 crews will “search for camouflaged enemy bases, inflict missile and bomb strikes on targets, and also work out fire support from the air to motorized rifle and tank units during the destruction of illegal armed formations in mountainous and desert areas”.

The exercises, which will also be attended by Tajikistan and Uzbekistan military, will be held at the Harb-Maydon training ground in the Khatlon region of Tajikistan.

On July 5, Tajik President Emomali Rahmon ordered the mobilization of 20,000 reservists to strengthen the protection of the state border with Afghanistan.

The Taliban, who claim to control 85 percent of Afghanistan, are ramping up the pace of the offensive, a U.S. intelligence source told CNN.

According to him, the US military fears that the Taliban may block the supply channels of imports to the Afghan government, after which Afghan government will completely lose control over the country.

After reaching the border with Tajikistan at the end of June and taking control of the most important border crossings on the Pyandzh River, by mid-June the Taliban reached the Pakistani border, capturing the Spin-Boldak border crossing.

On July 8, a Taliban delegation arrived for the talks in Moscow, where it asked Russian diplomats to become advocates for the lifting of sanctions.

"No one is talking about any targeted strikes on the territory of Afghanistan, and no one even thinks about any invasion of Afghanistan," Russian Foreign Minister Sergey Lavrov said in an interview with Interfax.

"You are confusing us with the Americans or with the experience that we "carried over" from Soviet times," he said.