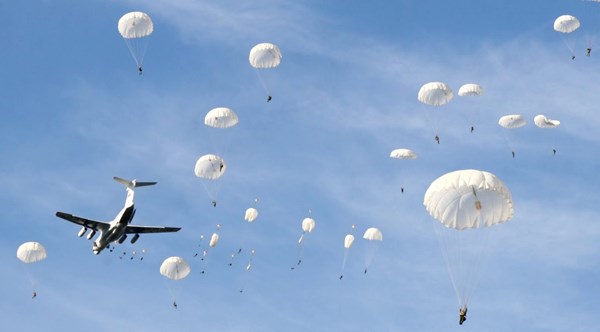 Russia has deployed paratroopers to Belarus as the migrant crisis on Belarus-Poland border escalates and the EU threatens to impose more sanctions against Belarus, which may also affect Russian national airline Aeroflot.

On Friday, as part of a snap combat readiness check several units of the Russian Airborne Troops were sent to the Grodno region for joint tactical exercises with the Belarusian armed forces, Interfax reports citing the press service of the Russian Defense Ministry.

The maneuvers, which Minsk associated with the increased EU’s military activity near the Belarusian borders, involve Il-76 transport aircraft, as well as helicopters of the Belarusian Air Force, RIA Novosti notes.

On Wednesday, Russian strategic bombers Tu-22M3 flew to Belarus. The bombers, which can carry nuclear weapons, "performed patrols in the airspace of the Republic of Belarus" and worked out "interaction with ground control centers," the Russian Defense Ministry reported.

Poland, in turn, announced that British troops will arrive in the country. They will conduct reconnaissance of the area and help local soldiers to reinforce the protective barriers.

Sources in the Polish Ministry of Defense told the PAP agency that the number of the British contingent will be determined after assessing the situation. London has officially confirmed that it is sending a "small group" of the military to provide "engineering support" in connection with the crisis at the border.

On November 15, the foreign ministers of the EU countries will gather for an emergency meeting, where they will have to approve the next, fifth package of sanctions against Belarus, which will include about 30 individuals and legal entities.

Among them - the national airline BelAvia, which is suspected of mass transportation of migrants, as well as Foreign Minister Vladimir Makei. Attempts to negotiate a resolution of the crisis with the Kremlin seem to have failed. Acting German Chancellor Angela Merkel held two telephone conversations with Vladimir Putin, urging him to influence Lukashenko, whom the West does not recognize as the Belarusian president, considering the 2020 elections to be rigged.

But Putin, according to the press service of the Kremlin, each time gave one answer: to resolve the crisis, it is necessary to "restore contacts between the EU countries and Belarus". Brussels does not want to talk with Lukashenko, whom it does not consider a legitimate president. Lukashenko in response continues to threaten the EU. On Thursday, he threatened to stop gas supplies through the Yamal-Europe pipeline, and a day earlier hinted at the possibility of nuclear war.

"If we make a mistake, if we stumble, it will immediately draw Russia into this whirlpool. And this is the largest nuclear power," Lukashenka said.