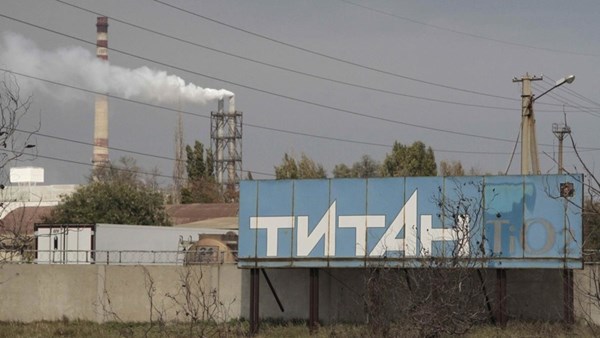 The arbitration court of the annexed Crimea decided that the Titan plant in the Crimean town of Armyansk should pay 736.9 million rubles ($10.5 million USD) to the Russia budget for the negative impact on the environment, as reported by Rosprirodnadzor (Russia's Federal Service for Supervision of Use of Natural Resources) in a press release on their website. According to the report, the inspection found that the enterprise was discharging liquid industrial waste into the acid storage.

The management of the plant tried to argue the payment of the fine, but the court refused to consider their statement. On the same day, September 10, the plant's general director Andrei Dogadov confirmed that the production at the plant was completely stopped. "Yesterday [September 9 ] we stopped the last stove," - Dogadov said on air of Crimea 24 channel. It is unknown when the company resumes production. Earlier reports said that this would happen only after its upgrade.

From the end of August, residents of the north of the Crimea and the south part of the neighboring Kherson region complained of a rust-like oily plaque covering metal objects. People also reported perspiration and sore throats, rashes on the skin and vomiting. Patients with signs of chemical poisoning arrived at the hospital. Pro-Russian authorities in Crimea concluded that the cause of the air pollution was the evaporation from the acid storage of the Titan plant. After the annexation of the peninsula, Russia re-registered it as a branch of the Russian LLC Titanium Investments.

More than 4,000 people were evacuated from Armyansk. In connection with the incident, local authorities ordered to close all the city’s schools and day cares for two weeks.