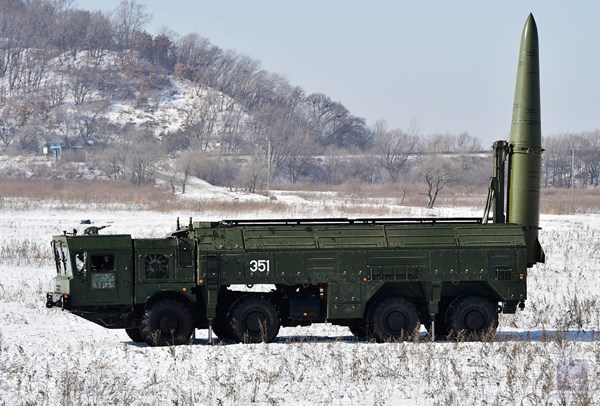 Russia is moving Iskander missile systems from at least two brigades of the Eastern Military District to the west. According to an investigation of the Conflict Intelligence Team (CIT), the Russian missile systems are being deployed to Ukrainian borders.

In a TikTok video, which was taken in the Far East and published on Twitter on January 11, the CIT identified a 9K720 Iskander-M operational-tactical missile system. Another video, filmed in the Sverdlovsk region and posted on January 13, shows less neatly tarpaulin-covered military trucks.

"During our previous research, we have never seen military equipment being covered by tarpaulin, except for these two Iskander-M systems," the CIT investigators noted.

"In another video published on January 11, we did not notice the launchers themselves and / or transport loaders but could identify all the same three-axle trucks and cargo trains. This time, the latter were loaded with containers, probably with Iskander missiles," the analysts said.

The CIT specifies that, according to indirect information from online sources, these trains with military equipment departed from the military railway station in Ulan-Ude and from the Birobidzhan-2 station, where the 103rd and 107th missile brigades are stationed. These units, which are armed with Iskanders, are part of the 36th and 35th Combined Arms Armies.

CIT notes that the transfer of the 107th missile brigade "to Ukraine" is also mentioned in the comments to one of the videos with Russian military equipment.

At the same time, the Russian Ministry of Defense explained the loading of equipment on the trains as a "snap readiness check" of the troops with their deployment to the training grounds "at a considerable distance from the points of their permanent deployment."

"However, firstly, there are still 8 months left before the Vostok-2022 exercises, for which the preparations are allegedly carried out, and secondly, it should be mentioned that in 2014 the deployment of Russian regular units to the territory of Ukraine was also explained by the exercises," the CIT analysts noted.

By mid-December, about 100,000 Russian troops were deployed near the Ukrainian border, including about 50 highly mobile battalion tactical groups, the Financial Times writes, citing sources familiar with Western intelligence data.

According to the estimates, that the number of troops could rise to 175,000 by the end of January, when the ground will freeze and be more suitable for tank movement in the event of a ground invasion.

Two long-time Putin's confidants told the FT that the most likely casus belli would resemble the one that led to the start of the war with Georgia in August 2008. Russia then responded to Tbilisi's attempt to gain control over South Ossetia by sending troops into Georgian territory with air and artillery support, using a blockade from the sea and cyberattacks.

Moscow will present the conflict with Ukraine as an attempt to protect the Russian-speaking population in the Donbas from what it will call "Ukrainian aggression", FT sources said.

The news background for such a development of events is already being prepared. On January 3, the People's Militia of the self-proclaimed Luhansk People’s Republic announced that on December 27, Ukrainian "nationalist militants" seized a school in the village of Valuske in the Donbas, and are now setting up headquarters there: cars with armed men and artillery reconnaissance equipment are arriving.

The LPR People's Militia said that the forces of the Ukrainian army are moving to the captured school.