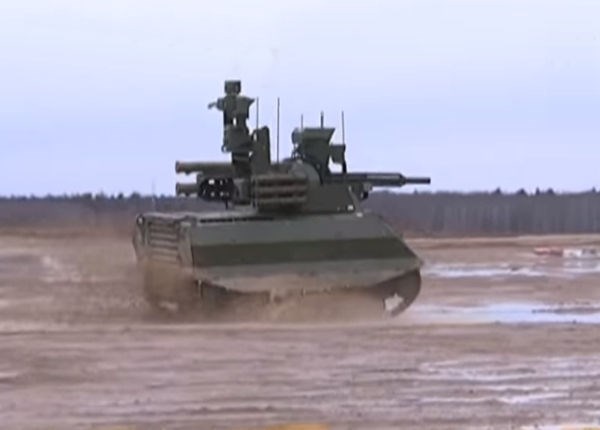 The Russian Armed Forces may receive groups of multifunctional combat robots by 2025, reports RIA Novosti, citing a source in the defense industry. Each group will be controlled by only one operator.

The interlocutor of the RIA Novosti said that currently unmanned units consist of five robotic platforms. Each of them "allows performing a lot of tasks".

"It's not like before when there was only one unmanned machine, and five people had to watch after it, and follow it. But, on the contrary, now it will be a group of five robots, and only one operator who refuels them, turns them on, and they become fully operational," said the source, as quoted by the news agency.

In January this year, it became known that the Russian Armed Forces received the first batch of Uran-9 combat multifunctional robotic systems. The Russian Ministry of Defense said  that they were tested in combat conditions in Syria.

The General Director of Kalashnikov Concern, Vladimir Dmitriev, said that the shortcomings were identified during the tests. In particular, the issues of control, reduced mobility, and unsatisfactory military intelligence and surveillance functions had been considered by engineers and were rectified.

Please visit out Twitter account for updates on the situation in Ukraine.
Follow us on Twitter
U.S. General Ben Hodges: by mid 2023 Ukrainian troops will enter Crimea
The Kremlin has decided to postpone official annexation of Ukrainian territories
German media: Nord Stream and Nord Stream 2 pipelines damaged beyond repair
Kyiv: U.S. is supplying Ukraine with devices to counter Iranian drones used by Russia
President of Kazakhstan promises safe heaven to Russian draft-dodgers
German media: Nord Stream and Nord Stream 2 gas pipelines may have been attacked by specially trained divers or submarines
Former chief of Russian space agency to head annexed territories of Ukraine
Putin's associate Prigozhin admits he is the founder of Wagner private military company
Russian defense lines collapsing near Lyman under pincer attack of Ukrainian Forces
Lavrov: Russian nuclear doctrine will apply to newly annexed territories of Ukraine
On September 30th, Putin to declare annexation of Russia-occupied territories of Ukraine
Ankara: Turkey will not recognize results of referendums in Russia-occupied territories of Ukraine
Berlin: Germany is ready to provide asylum to Russian 'draft dodgers'
Russia begins accession referendums in occupied territories of Ukraine
Kadyrov: there will be no mobilization in Chechnya
Zelensky to drafted Russians: Protest, fight back or surrender to Ukrainian captivity
Classified clause of Putin’s mobilization decree allows Russia to draft up to a million people
215 Ukrainian military freed from Russian captivity in exchange for Putin’s friend Medvedchuk and 55 Russian POWs
Flights leaving Russia sell out after Putin announces 'partial' mobilization
Erdogan: Russia must return all seized territories to Ukraine to end the war