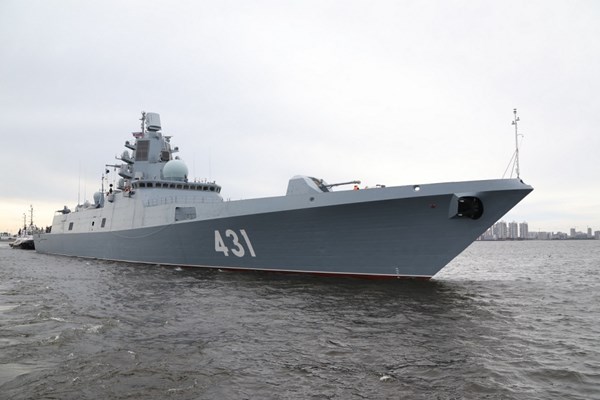 “Admiral Kasatonov”, the latest Russian frigate of the project 22350 class, has proceeded to the next stage of factory tests, which are being conducted in parallel with state tests. The ship’s crew will be testing the on-board weapons at maritime test ranges in the White Sea, Russia’s North Fleet announced in a press statement.

“On Wednesday, the first serial frigate of project 22350, ‘Fleet Admiral Kasatonov’, entered the White Sea from Severodvinsk for the next stage of mobile factory tests. At sea, it will conduct a set of prepared actions to test the on-board weapon systems,” the statement reads.

The fleet’s press service also mentioned that the frigate’s crew has already rehearsed cooperating with aircraft. Su-24 airplanes, Ka-27 and Ka-31 helicopters belonging to the fleet’s air force and anti-air defense made fly-bys over the ship’s radar systems. The helicopter pilots also made several landings and take-offs from the deck. The ship’s operation in ice has also been tested.

The frigate’s mobile factory tests began on November 20 at the same time as the state tests. The North Fleet’s White Sea Naval Base is responsible for the testing.

The Severnaya Verf shipyard, the ship’s manufacturer, aims for the frigate to be transferred to the Navy by the end of the year.

Admiral Kasatonov is the second project 22350 ship and the first serial one after the lead frigate “Admiral Gorshkov”. The vessel has a displacement of 5,000 tons, a length of 135 m and a beam of 16 m. With a range of 4,850 nautical miles, the frigate has a top speed of 29 knots. Requiring a crew of 170, the vessel can spend 30 days at sea on its own.

The frigate is powered by a 65,000 h.p. CODAG and diesel generators with 4kw of power.

It is equipped with a 130 mm A-192 artillery system, a Poliment-Redoubt anti-air missile system, a launcher for 16 Oniks and Kalibr anti-ship missiles, a Paket anti-submarine system and a Ka-27 anti-submarine helicopter.