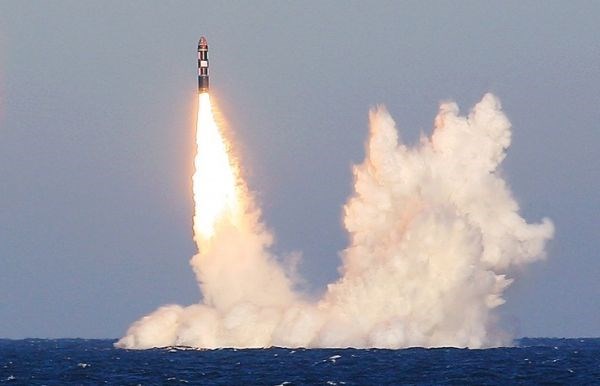 The firing of Russia’s R-30 “Bulava 30” submarine-launched ballistic missile (SLBM) does not include the possibility of breaking through the ice, writes military expert Maxim Klimov in an article for LiveJournal.

According to him, the R-30 Bulava 30 can only be fired from a Borei-class nuclear submarine through “a large, clean opening in the ice”. Searching for such an opening could take an extremely long time, which is incompatible with the high missile readiness required of the naval strategic nuclear forces, the expert claims.

Klimov writes that if the Supreme Commander-in-Chief gave the order to fire an R-30 Bulava 30 from beneath the ice, it would only be possible in one or two days’ time, once the submarine found a suitable opening. The expert considers such a situation “nonsense”.

Klimov points out that the R-39UTTKh “Bark” SLBM, the development of which ended in the late 1990s, lacked the shortcomings of the R-30 Bulava-30. In his opinion, “the option to pass through the ice when firing an SLBM” is “critically necessary” for fourth generation submarines.

The expert draws attention to a number of inconsistencies in what various officials have said. For example, Major General Yevgeny Ilyin, acting head of the Russian Defense Ministry’s chief directorate for international military cooperation, said that the R-30 Bulava 30 would be used during Russia’s Grom-2019 strategic nuclear forces exercise in October, but this did not actually happen.

Klimov considers it “absolutely abnormal and unacceptable” that the nuclear submarines Alexander Nevsky and Vladimir Monomakh have not practiced firing an R-30 Bulava 30 since being transferred to the Pacific Fleet. He believes that this could be due to the fact that the submarines’ permanent base in Vilyuchinsk (Kamchatka) was actually not ready to accept Borei-class submarines, despite the claims by numerous officials and news outlets that it was.

In August, the Russian military expert Dmitry Boltenkov said that project 955 Borei-class submarines usually fire R-30 Bulava 30 missiles from the Barents or White Sea, which could indicate that certain elements of the Borei-Bulava system have been inadequately developed or are not yet ready.

In June, The National Interest wrote that the accuracy of the R-30 Bulava 30 is insufficient for use in a “first strike” scenario, which would require it to destroy the US’s LGM-30 Minuteman silos.

In December 2018, Doctor Igor Gladkov, a correspondent at the Konstantin Tsiolkovsky Academy of Cosmonautics, said that the large number of test launches of the R-30 Bulava is due to the imperfection of Russia’s trajectory measuring instruments, since this equipment was produced in Ukraine.

The R-30 Bulava 30 SLBM was developed by the Moscow Institute of Thermal Technology for use on project 955 Borei-class submarines. Testing of the missile began in 2004. Out of 33 launches from submarines, seven were unsuccessful and two partially unsuccessful.