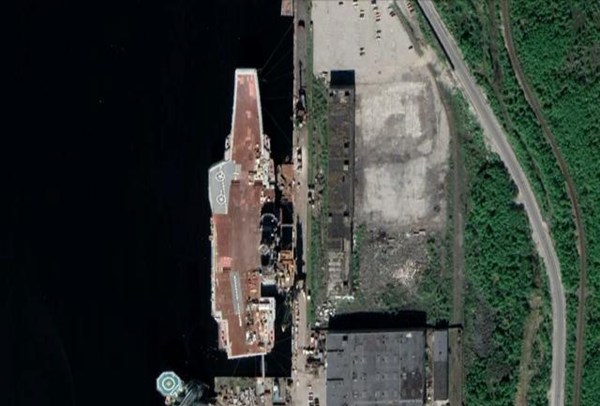 Russian aircraft carrier Admiral Kuznetsov, which is currently the only Russian aircraft carrier in service, contrary to the intended repair, "broke" even more in a year. Judging by satellite images published by the Chinese publication Sohu, there has been no repairs done on the warship yet. However, in one a year, its deck has rusted significantly so that it became noticeable even from outer space.

Satellite images show that there is no real progress in repairing the admiral Kuznetsov aircraft carrier, but part of the deck closer to the stern has rusted significantly in less than a year.

Earlier, the Russian news agency TASS reported, that Zvezdochka shipyard, where the ship is being repaired, opened a tender for the painting of the aircraft carrier’s external surface which is expected to be completed by September 1, 2022. More than 250 million rubles ($3.4 million) will be allocated for this work. The bidding closed on May 20. According to the shipyard’s press service, the ship is expected to re-join the Russian Navy in 2022.

On December 12, 2019, a fire broke out on Admiral Kuznetsov. One sailor was killed, another one could not be found, and ten have been hospitalized.

In 2016, Admiral Kuznetsov participated in the military operation in Syria. Russian fighters carried out more than 400 combat sorties from the ship. Two fighter jets from the Admiral Kuznetsov crashed during its Syrian operation. A Su-33 rolled out of the deck and fell into the sea during the landing on the ship. In the second case, a MiG-29 fighter crashed when approaching the ship.