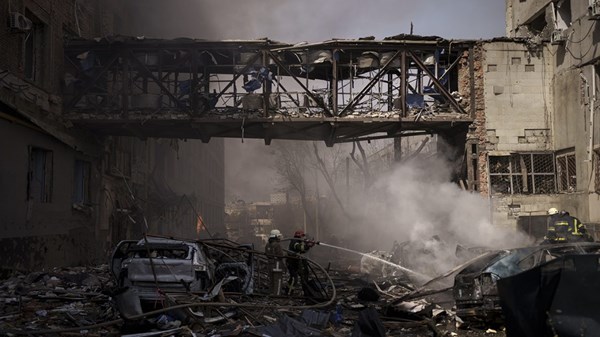 Ukrainian officials in the city of Kharkiv have said Russian attacks on the city have intensified since Sunday. The city has been subject to indiscriminate attacks since Russia launched its invasion of Ukraine on February 24th, but as Ukraine’s second largest city and its close proximity to the Russian border, it has become one of Moscow’s primary urban targets in Ukraine’s east as Russian forces commence their Donbas offensive. Ukrainian forces were able to repel Russian advances on the city in the early stages of the invasion, thwarting Moscow’s plans for a quick and easy military operation.

In a Telegram video released on April 19th, Head of the Kharkiv Regional Military Administration, Oleg Sinegubov, noted "the occupiers are again shelling residential areas of Kharkiv, in particular, the Kyiv and Industrial districts. The Russians use multiple launch rocket systems from a distance of 35-40 km. As of now, in Kharkiv, unfortunately, 16 were wounded, and 3 people were killed.”

The city’s Mayor, Igor Terekhov, told CNN on Tuesday that there has been  "non-stop bombardment of civilian districts" in the city since Sunday.

"In the last few days, [Russian shelling] has been in the center and it’s targeting peaceful civilians,” Terekhov noted. "The enemy is targeting civilians, many people are wounded and some unfortunately dead. In the past day and a half, we’ve had 15 people killed and more than 50 wounded. Those 15 killed was just in one attack."

On Monday, Chef José Andrés' World Central Kitchen, a relief organization that provides meals to victims of disasters, was hit by a Russian missile strike in Kharkiv.