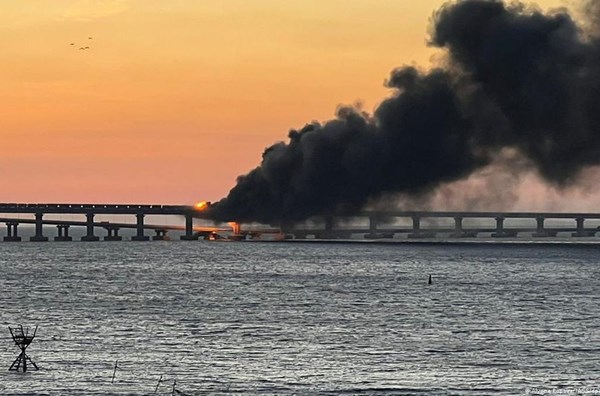 The authorities of the annexed Crimea make contradictory statements all morning following the explosions and destruction of the Crimean Bridge. First, the Ministry of Transport of Russia reported that the Kerch ferry crossing resumed its work and the first ferry was already being loaded, three more were preparing to leave. Later, the Russian state new agency TASS reported, citing local authorities, that the ferry would not be launched due to weather conditions.

At the same time, the acting Minister of Transport of Crimea, Nikolai Lukashenko, said that weather conditions are suitable for the ferry service to begin. According to him, two ferries are already being prepared and several are on the way.

Also, uncertain information comes from local authorities about whether restrictions will be imposed on the sale of fuel and groceries. At first, the local Ministry of Industry said that only up to three kilograms of groceries would be sold per person. But the adviser to the head of the Crimea, Oleg Kryuchkov, said that this information does not correspond to reality. After that, the Ministry of Industry stated that "there are no restrictions on goods, and they will not be introduced."

Despite this, the governor of Sevastopol, Mikhail Razvozhaev, said that restrictions would be imposed on food and gasoline. But then he changed his mind and wrote: "All restrictions on the sale of food and fuel are lifted."

Earlier, the news outlet Meduza published the contents of a "manual" compiled by the Russian Presidential Administration for state media, with recommendations for covering the explosions on the Crimean bridge. The news agencies are recommended to mention that the Kerch ferry crossing was launched.

On October 8, at 6 a.m., an explosion occurred on the vehicle section of the Crimean Bridge. Russian authorities said a truck carrying explosives was blown up on the bridge. As a result, the fuel tanks of a train, which was going along the railway section of the bridge, caught fire.

The Russian Investigative Committee opened a criminal case but did not specify under what article. The head of the parliament of the annexed Crimea said that the roadway was damaged by "Ukrainian vandals".

After the explosion on the bridge, Russian Railways suspended the sale of tickets for trains going to and from Crimea.