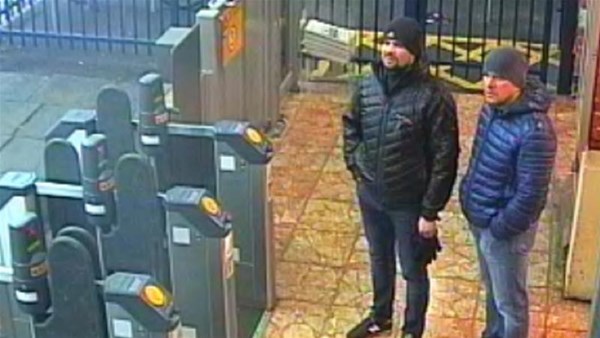 Russians Alexander Petrov and Ruslan Boshirov, the suspected perpetrators of the Novichok nerve agent poisoning in the city of Salisbury, bought flight tickets to London with foreign passports whose numbers differ by only the last digit,  reported the Russian newspaper Fontanka.

According to official information, Petrov and Boshirov flew on March 2 from Sheremetyevo Airport, Moscow, to Gatwick Airport, London. 150 passengers were registered for Aeroflot flight SU2588.

Boshirov and Petrov bought their flight tickets with foreign passports of the “65” series, and their document numbers differ only on the final digit: ...1924 and ...1927 respectively.

According to Fontanka, there is virtually no information about Boshirov in open information sources. He was born on April 12, 1978 in Dushanbe, Tajikistan, and was registered in Moscow in a 25-story building on Bolshaya Naberezhnaya Street.

In 2015, two administrative cases were filed against Boshirov for traffic fines that he received three days apart, on July 20 and 23. The case numbers are not in logical order – the first has the number 433048 and the second 432322, although they were filed by the same department – the inter-district department of court bailiffs for collection of administrative fines No. 1 Moscow.

The Moscow judges’ portal has no record of administrative violation cases against Ruslan Boshirov, neither does the bank possess any information on them.

“Only an old lady lives in the apartment you mentioned. We hold her money, she raises it to hire a cleaning lady. We have never seen a man in the apartment, nor met one at reception. The only thing we can suppose is that he is the homeowner’s son, who is registered at the address, but has never lived here,” residents replied.

Boshirov is not particularly active on social networks either. The profiles created under this name and surname in 2014 are empty. On Facebook, Boshirov has only one friend, a young woman from Ukraine.

According to Fontanka, Boshirov and Petrov’s international passports (normal, not biometric) were issued only two years ago, when the 65th series forms started to be issued. Both flew to Europe frequently on these passports. Between September 2016 and March 2018, they visited Amsterdam, Geneva, Milan and on several occasions Paris.

Alexander Petrov had stayed in London at least once prior to the Salisbury incidents, between February 28 and March 5, 2017. Even less is known about him. He was born on July 13, 1979. A person with the same date of birth, name and surname, features on a staff list from Microgen, Russia’s largest producer of immunobiological products. The company was founded in 2003 through a merger of companies in the immunobiological sector.

Earlier the UK disclosed the names of two Russians who are suspected of perpetrating the poisoning in Salisbury earlier this year – Alexander Yetrov and Ruslan Boshirov. Investigators believe that both suspects are roughly 40 years of age and used pseudonyms during their stay in the UK. Police have also shown their route in London and Salisbury in detail using surveillance camera footage.

British Prime Minister Theresa May said that the suspected Russians are officers of Russia’s Main Intelligence Directorate. Russia’s Foreign Ministry said that persons bearing such names are not known to it, and accused the UK of “information manipulation”.