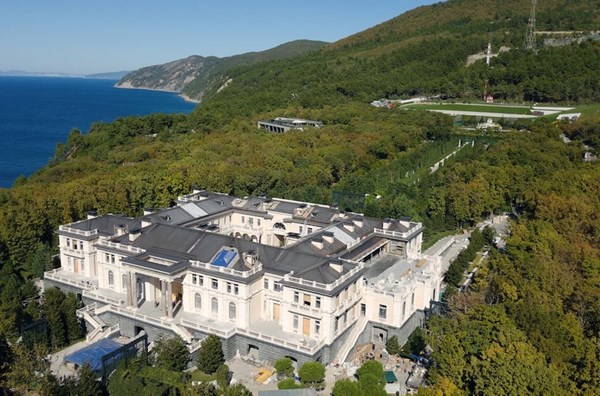 The residence of Russian President Vladimir Putin in Gelendzhik has a 16-storey underground complex, reported the news website Meduza.

One of the mining engineers involved in the construction of the bunker told reporters that a few dozen meters from the main house there is an elevator lobby for an underground entrance.

"Under the house there is an entire anthill built into the rock. The 14th and 15th levels host the upper block of technical premises. There is a wine room on the 18th. At the very bottom, on the ground floor, there is also some technical space, and a hundred-meter tunnel, which leads to the beach. The main VIP exit to the beach area, was initially supposed to have a moving walkway, as in Sheremetyevo airport," he said.

The engineer also said that on the eighth floor of the bunker, where a window in the rock was cut out, they planned to make a whole loggia that would overlook the sea.

"You can get Inside Cape Idokopas from three different lobbies: one at the main house, the other on the pier, and another runs across the entire rock up to Molokanov slit," he added.

The engineer noted that the cost of building one such mine is comparable to the construction of one or two subway stations.

The video investigation of the Anti-Corruption Foundation founded by the Russian opposition leader Alexei Navalny was published on YouTube on January 19. On January 26, it was viewed more than 91.6 million times. In the two-hour video, named “A Palace for Putin: The Story of the Biggest Bribe" Navalny speaks about the palace, which is being built and maintained at the expense of Russian state-owned oil giants Rosneft and Transneft. These companies are headed by Putin's closest friends, Igor Sechin and Nikolai Tokarev.

According to the Anti-Corruption Foundation, the 17,691-square-metre palace is the largest private residence in the country, with an estimated value of 100 billion rubles ($1.33 billion USD). The surrounding area has a hockey field, a church, a greenhouse, a tea house and a tunnel leading to the sea.

The film begins with a call to come to a rally in support of Navalny who was detained a week earlier and arrested for 30 days. On January 23, mass protests were held across Russia, at which 3,770 people were detained, a record number in the country's modern history. The rallies were also held abroad. Leonid Volkov, Navalny’s partner, announced new protests on January 31.