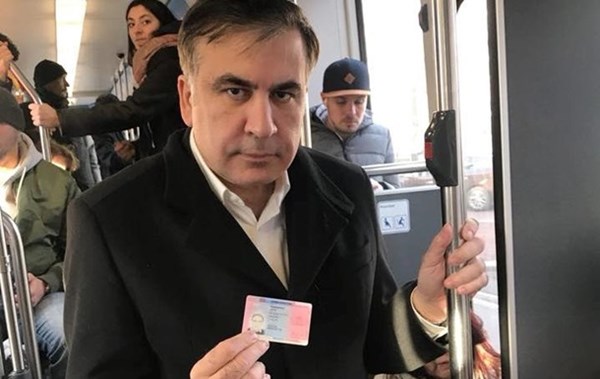 The leader of the “Rukh novykh syl” party (New Forces Movement), Mikheil Saakashvili, received an identification card in Amsterdam which gives him the right to live and work in the European Union, as he reported on his Facebook page.

"Today in Amsterdam, for the first time in a while, I acquired a real document proving my identity. Immediately upon arrival in the Netherlands, I was given an identification card providing me with the right to live and work in the European Union, the entire procedure took only a few minutes," he wrote.

However, Saakashvili stressed that he "is more than ever determined to regain his Ukrainian citizenship."

The politician published a photo of him with a certificate on the street car.

I was reported earlier that Saakashvili came to the Netherlands from Poland. At a press conference in Warsaw, he announced that he intends to reunite with his family in the Netherlands and after that he plans to visit other European countries and engage in political activities.

Saakashvili was detained on Monday, February 12th, in the Suluguni restaurant in Kyiv by employees of the special division of the State Migration Service of Ukraine.

A few hours after his arrest, his was sent to Warsaw on a charter flight. The Polish Border Guard Service confirmed that Saakashvili was accepted as part of the readmission procedure initiated by the State Migration Service of Ukraine.