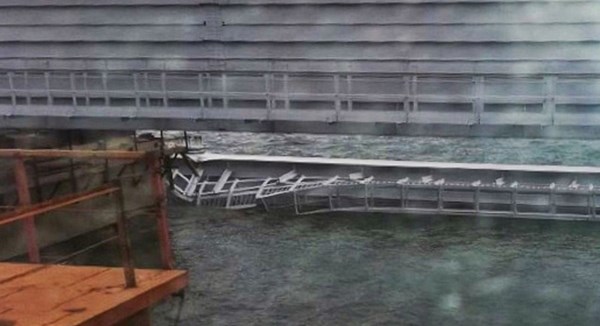 A section of the railway portion of the Crimean bridge fell into the sea during assembly, the Russian Taman Road Administration reports.

“On the sea stretch of the bridge construction between the Kuzlinsky Split and the island of the same name, during the process of lowering onto supports, one of the railway spans tilted and fell into the shallow waters,”- the report states.

The incident was presumably due to technical issues with the jack system. No staff members were injured.

“The supports were not damaged and the carrying capacity was not compromised. The span structure, which ended up in the water, will be pulled out with cranes after the necessary preparation. A new span structure will be installed in the fallen one’s place. According to preliminary estimates, 30-45 days will be required for this,” the report adds.

At present, the builders are assessing the consequences of the accident.

The motorway part of the Crimean Bridge was opened to trucks on October 1 this year.