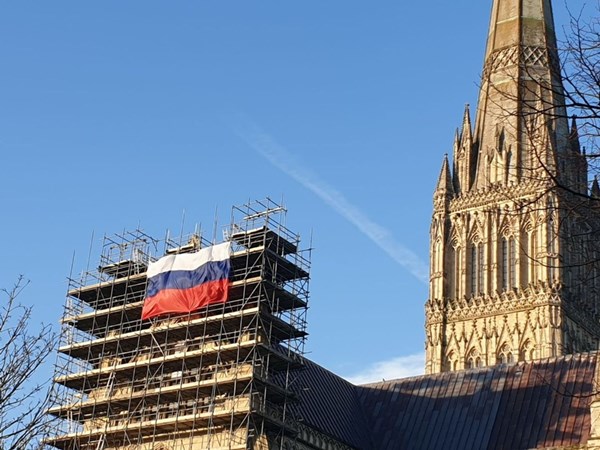 The Russian Embassy in London considers the appearance of a Russian flag on the Cathedral in Salisbury a provocation, stated the Press Secretary of the Russian Diplomatic Mission on Sunday.

"We have no official information about this. If it is true that a Russian flag was hoisted on the, in our opinion, it looks like a real provocation,” the diplomat said.

He added that almost a year after the poisoning in Salisbury, Britain still has not provided any evidence of Russia's involvement in the incident. The investigation is classified, and numerous requests by the Russian diplomatic mission were ignored. "We believe that the appearance of a Russian flag at the Cathedral is another clumsy attempt to associate Russia with the sad events that occurred in Salisbury in March last year,” the diplomat stressed.

The local newspaper Salisbury Journal reported that a Russian flag was hung on scaffolding around the Cathedral in Salisbury. According to the newspaper, it appears to have been attached to the scaffolding by someone who climbed there on Saturday night. It was taken down in the morning after cathedral staff were made aware of it. The newspaper published a photo of the flag being taken down.