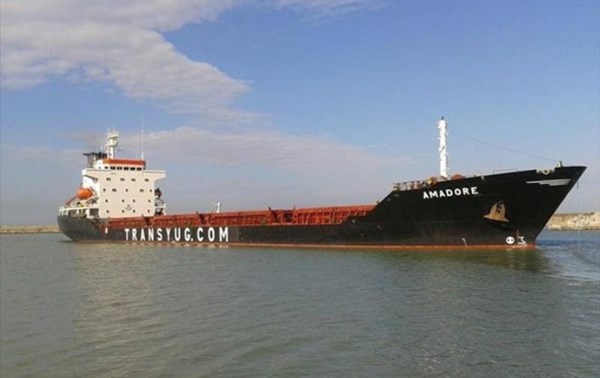 On the night of Saturday, September 1, the coast guard of the Russian Federal Security Service detained the Ukrainian bulk cargo ship Amadore in the Azov Sea, which was on the way from Mariupol near Berdyansk, reported on Facebook the Editor-in-Chief of the information portal BlackSeaNews, Andrey Klimenko.

"At 10:00 am on Saturday morning, the vessel was still detained. Usually such detentions continue for three hours. However, on the way to the Azov Sea this vessel waited for permission in the Kerch Strait [for] 119 hours,” Klimenko wrote. According to him, the owner of Amadore is a company from Odessa. This is the 99th detention since May 17, not including inspections before entering the Kerch Strait.

Earlier, the Russian Federal Security Service detained a Ukrainian fishing boat in the Black Sea, allegedly, for the illegal fishing of flounder as it headed westward to Tarkhankut cape. Five crew members, citizens of Ukraine were taken to the annexed Crimea. They were detained in the office of the Russian Federal Security Service in Balaklava “in inhuman conditions” for over month and a half. One of the fishermen tried to hang himself.

Later, the Verkhovna Rada Commissioner for Human Rights, Lyudmyla Denisova offered to exchange the crew of the Nord for the fishermen from the fishing vessel YMK-0041. In August, she agreed with the Russian human rights commissioner, Moskalkova on assistance for the detained sailors.