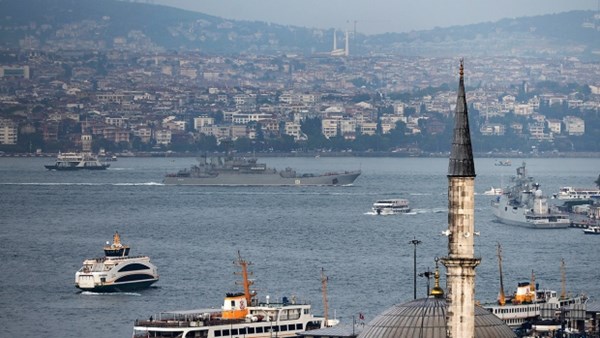 The continuation of the conflict in Syria’s Idlib province, which remains in the hands of pro-Turkish forces and radical groups, could force Ankara to close the Bosporus strait to Russian naval vessels, said Muharrem Sarikaya, a correspondent for the Turkish TV channel Habertürk, citing his own sources in the country’s leadership. According to him, Turkish President Recep Tayyip Erdogan has such options “on the table”. The Montreux Convention, which regulates ship traffic through the Bosporus and Dardanelles straits, allows for such measures.

Sarikaya pointed out that the Syrian government army’s offensive in the Idlib region, which has resulted in increasing numbers of Turkish casualties, has heightened the tension in Moscow-Ankara relations.

“A retreat in Idlib would mean that Turkey could surrender its positions on several fronts, especially in Libya. That’s why the Turkish resolve is reaching a level after which the crisis could easily reach the next one,” the correspondent remarks.

If negotiations with Russia do not bring about some consensus regarding the fate of the insurgent Syrian province, Sarikaya believes that this will result in changes to the implementation of several points of the Montreux Convention. According to one of the articles of the convention, Turkey can simply deny Russian ships passage through the Bosporus strait.

The convention prescribes free passage through the Bosporus and Dardanelles straits for the civilian vessels of all countries in both peace time and war time. The international document recognizes the special status of the Black Sea states (Bulgaria, Georgia, Russia, Romania, Turkey and Ukraine). During peace time, ships of any category, including naval submarines, have the right to pass through the straits without restriction, provided that they give Ankara 8 hours notice. However, if Turkey is involved in a war, or if it is in “direct military danger”, it has the right to deny any military vessels passage through the strait, and also to regulate ship traffic at its own discretion.

During combat which Turkey is not involved in, it also has the right to deny passage to vessels from the belligerent country. The Montreux Convention has repeatedly been criticized for failing to specify exactly what constitutes “direct military danger”. This point can be interpreted very broadly.

It should be noted that Erdogan recently compared the situation in Idlib to a state of war. Speaking in parliament on February 26 to members of his own party, he said that Turkish forces will not take a single step back in Idlib, whose inhabitants, he claims, do not want to return to Damascus’s control.

“We will create conditions under which the [Syrian] population can return to their homes,” the Turkish leader promised. “We are considering various options, including active intervention.”

The Turkish President believes that Ankara’s only problem in connection with the Idlib crisis is related to the use of airspace.

“We intend to resolve this issue soon,” he said.

He also pointed out that the time which Ankara has given Damascus to withdraw its forces to the positions stipulated in the Sochi memorandum is about to run out. When it does, Turkey’s leadership could choose to take radical measures.

So far, the crisis in Russian-Turkish relations has worked in the West’s favor. NATO’s Supreme Allied Commander Europe Told Wolters, who is also the commander of the US European Command, said that Ankara and Washington should develop a bilateral partnership and cooperate within NATO to oppose Russia. In his opinion, Turkey’s role in this campaign should be neutral. In his written introduction to hearings at the US Senate Committee on Armed Services, the commander expressed certainty that both Moscow and Ankara “consider the Black Sea region their natural area of influence”, but “they continue to be at odds in Libya and find themselves in direct clashes in Syrian Idlib”. Wolters is convinced that it is in the long-term interests of both the US and Turkey to oppose Russian policy.