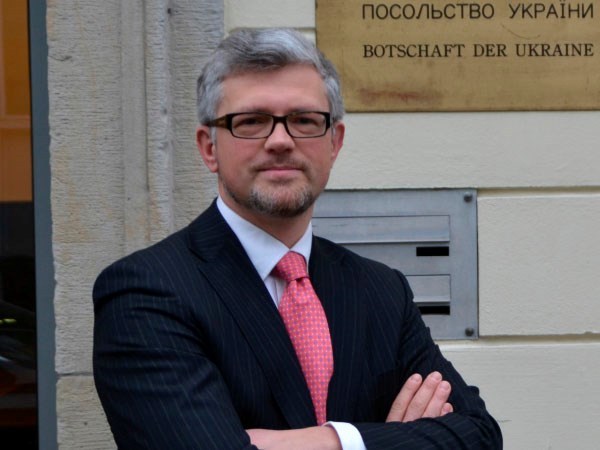 Ukraine's Ambassador to Germany Andriy Melnyk declined an invitation of Berlin Mayor Michael Mueller to attend a joint wreath-laying ceremony at Memorial Plaque Schulenburgring 2, where the Wehrmacht troops, who were defending Berlin, surrendered on May 2, 1945, reported the German publication Tagesspiegel.

"A few weeks ago, three ambassadors received an invitation from Berlin Mayor Michael Mueller. Together with representatives of Russia, Ukraine and Belarus, he wanted to lay a wreath this Saturday to mark the end of World War II, and not at one of the city's major landmarks, but in front of an imperceptible apartment building in the Berlin-Tempelhof area... The Ukrainian ambassador declined the invitation," the newspaper writes.

Melnyk expressed gratitude to the mayor for the invitation, which he called "recognition of the undeniable contribution of the Ukrainian people to the liberation of Europe from the violent Nazi regime", and explained the reason for his refusal.

"Honoring the memory of Ukrainian heroes, standing side by side with the representative of the aggressor country, which for the sixth year in a row is waging a bloody war in eastern Ukraine and illegally occupied Crimea, I could not imagine even in the worst nightmare," the ambassador said, emphasizing that during this time more than 14,000 Ukrainians have become victims of the Kremlin’s aggression.

The ambassador also recalled that during the Second World War more than six million Ukrainians fought in the ranks of the Red Army and another 250,000 - in the Allied troops. More than three million Ukrainian soldiers did not return home alive, including those who lost their lives in the last days of the war in the operation to liberate Berlin.

The Wehrmacht and the SS killed more than five million people in Ukraine, which was fully occupied between 1939 and 1944.

He also expressed regret that there is still no monument to the Ukrainian victims of Nazism in Berlin, and the level of knowledge of the German public about these huge victims of Ukraine is still extremely limited.

Earlier, Berlin canceled the events to mark the 75th anniversary of the end of World War II. Putin also ordered to postpone the May 9 parade in Moscow due to the coronavirus pandemic.