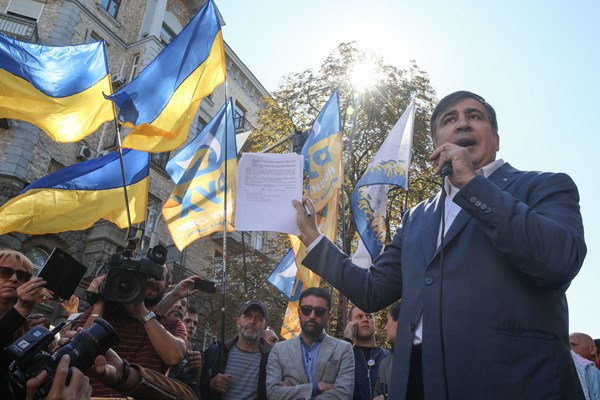 The former President of Georgia and the former Governor of the Odessa region, Mikhail Saakashvili, was found guilty of illegally crossing the Ukrainian border by the Mostitsky District Court of the Lviv region.

“In the administrative case on the illegal crossing of the Ukrainian border, the court finds the defendant guilty and imposes a fine 3400 hryvnia ($130)," the judge said. Also, Saakashvili must pay 320 hryvnia ($12.2) court fees.

Saakashvili did not attend the court session. On his Facebook page, he said that he decided not to cancel his meetings with people in Cherkasy. "This is exactly what the authorities want - to exhaust us with judicial proceedings, so that we would not have the opportunity to talk with the people," Saakashvili wrote.

On September 10th, Saakashvili managed to cross the Polish-Ukrainian border at the Shehyni checkpoint. His supporters broke through the cordon of Ukrainian security forces. They surrounded the politician in a tight ring, along with the Deputies and public figures who accompanied him, and literally "brought" them into Ukraine.

The border guards provided Saakashvili with the protocol on committing an administrative offense under section 204-1 part 2 of the Code of Ukraine on Administrative Offenses (illegal crossing of the state border). For the commission of such an offense, a fine of up to 8.5 thousand hryvnia ($323) can be imposed. On September 16th, Ukrainian Prosecutor General, Yuriy Lutsenko, said that Saakashvili will not be arrested and expelled from the country because of the incident at the border.