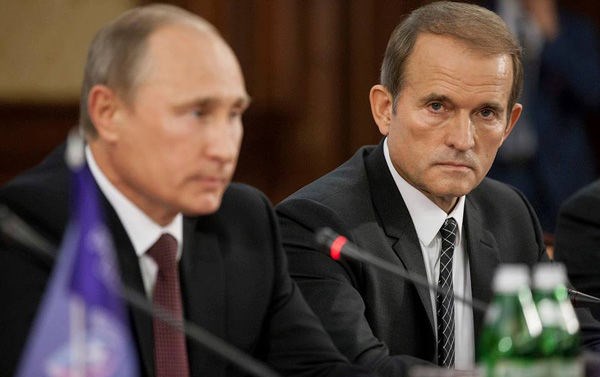 In the summer of 2014, Viktor Medvedchuk was in constant contact with the Kremlin and the representatives of the so-called Donetsk and Luhansk People’s Republics, report journalists of Bihus.Info, who claim they have received recordings of Medvedchuk's phone conversations with Donbas militants.

Medvedchuk said he was carrying out negotiations at the request of Russian President Vladimir Putin and then-President of Ukraine Petro Poroshenko,

Journalist Denys Bihus does not disclose the source of the audio recordings but makes it clear that they were made by the Ukrainian Security Service. These recordings were not made public during Poroshenko's presidency.

The first part of the video report, lasting more than 45 minutes, provides wiretaps of Medvedchuk's conversations and shows his rise as a negotiator for the Donbas, which, subsequently, lead to him gaining importance in Ukrainian politics.

"He wrote to the administration of the Ukrainian post-Maidan president and dictated his terms. He got a mandate to represent Ukrainian interests but would use it to actually promote Russian interests, and to enrich himself in this war," Bihus said.

Bihus.Info reports that at that time Medvedchuk regularly visited the Office of the Ukrainian President and communicated with the Donbas militants with Poroshenko’s approval.

Medvedchuk had reportedly an aide, a representative of his organization "Ukrainian Choice" Dmitry Doroshenko, who in early June 2014 lived in the territory of the Donbas which is not under Kyiv's control and met with LPR and DPR representatives to establish ties.

On June 2, Medvedchuk told Doroshenko that he was flying to Sochi to meet with Putin and find out whether he was expected to negotiate on the Donbas.

At the same time, after listening to an array of recordings, Bihus concludes that Medvedchuk's relations with the Russian President were not close at the time. Medvedchuk could not call the Russian president directly and was communicating with representatives of Putin’s office. It would take weeks for Medvedchuk to get a meeting with Putin.

On May 11 , Ukrainian Prosecutor General Irina Venediktova said that Medvedchuk and his party associate Taras Kozak are suspected of treason and embezzlement of national resources in annexed Crimea.

The next day Medvedchuk and his lawyers arrived at the Office of the Prosecutor General. The politician said that he had read the indictment and considered the charges against him unfounded.

On May 13, the Kyiv Pechersky court placed Medvedchuk under house arrest on suspicion of treason and violation of the rules of war.

Ukrainian President Volodymyr Zelensky called Medvedchuk an oligarch and said that he had been legally deprived of the opportunity to cause "devastating harm" to the country’s security.

Russian President Vladimir Putin, commenting on the arrest of his friend Medvedchuk said that Ukraine has "turned into Russia’s antipode."