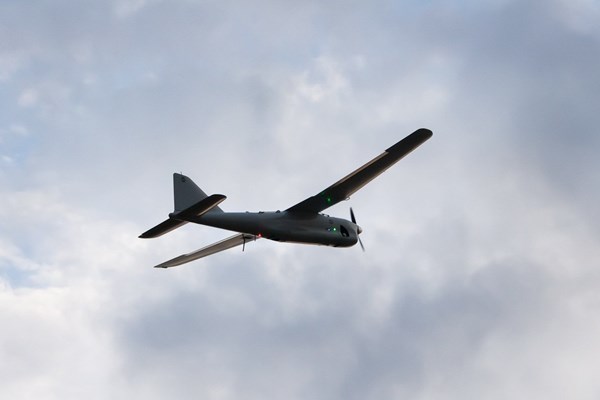 A Russian Orlan-10 model unmanned aerial vehicle (UAV) fell near the village of Novohradivka on Saturday, September 16 due to a technical malfunction of the system, reports the press service of the Ukrainian military headquarters in eastern Ukraine.

According to the Ukrainian military, the air defense of the Ukrainian Armed Forces carefully tracked its route, but failed to shoot down the UAV.

"It corresponds to a model that is manufactured in Russia. The ‘Orlan-10’ is being developed by a Russian enterprise called the ‘Special Technology Center’. The hull and engine is of Russian manufacture; the electronic ‘stuffing’ comes from Taiwan, however, which is not surprising. The unmanned aerial vehicle is not cheap - the complex itself is 18 million rubles ($310,000 USD), and the cost of the aircraft fluctuates around five to seven million rubles ($121,215 USD)," the military spokesman said.

Russian and separatist troops often use the “Orlan-10” along the demarcation line in the Donbas to adjust the fire of their own artillery. The drone belongs to the class of operational-tactical short range UAVs. It does not require a runway for takeoff and landing, as it starts from a catapult, and can also land with a parachute on a pneumatic inflatable buffer.

"These UAVs are a serious threat and, as a rule, they are applied in a complex manner, two or three planes per operation. Let’s say there are three aircraft in the group; the first is reconnaissance from a height of 1000-1500 meters, the second a UAV for electronic warfare, and the third a transponder that transmits intelligence information to the control center (at a height is 4.5-5 km or more). More often, within the group of two reconnaissance vehicles and transponder, it is likely that within the groups of two UAVs there is additional equipment on the scout for creating active noise interference," noted the headquarters of the Ukrainian military command in eastern Ukraine.