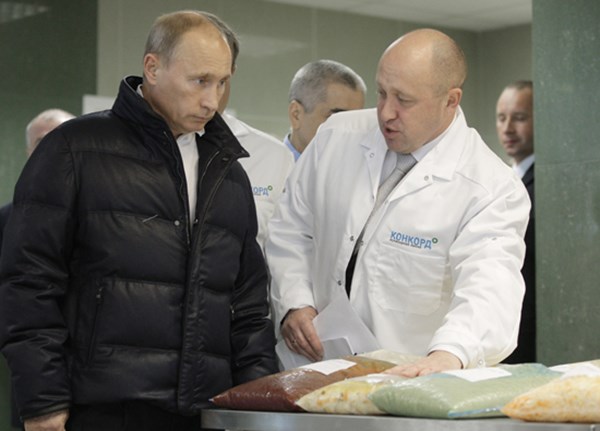 According to SPARK-Interfax, a person by the name of Dmitry Valeryevich Utkin became the CEO of LLC Concord Management and Consulting on November 14, replacing Anastasia Sautina. The new manager’s name and patronymic coincide exactly with those of the presumed commander of the Wagner Group private military company.

RBC news agency sent an official information request to Yevgeny Prigozhin’s representatives. An RBC source close to Prigozhin confirmed that the new CEO is in fact the Wagner Group commander.

According to information on the company’s official website, LLC Concord Management and Consulting belongs to the Concord company group, which is co-owned by St. Petersburg businessman Yevgeny Prigozhin. The company manages Prigozhin’s restaurant holdings, which include several restaurants in Moscow (the River Palace boat restaurant) and St. Petersburg (Russian Ampir, Russkiy Kitch, Polenta), as well as the network of Chocolate Museum boutiques. Additionally, Concord Management and Consulting is constructing the “North Versailles” village on the outskirts of St. Petersburg. “By design, this will be a palace-park ensemble in the spirit of the residences of the monarchs of previous centuries,” the company’s website states.

Prigozhin’s company Concord M supplies the food for the Russian Presidential Affairs Department. The businessman also supplies 90% of the lunches at Moscow schools, and organizations related to him have won tenders to clean the barracks and educational institutions of the Ministry of Defense.

The St. Petersburg-based news outlet Fontanka has repeatedly named Utkin as the commander of the Wagner Group. Sources told RBC that the private military company first appeared in the Middle East shortly after Russia officially opened its military bases in Syria. Roughly 2500 people have served in the group. The Wagner Group’s involvement in the Syria campaign was first reported by Fontanka in October 2015. Fontanka and The Wall Street Journal claimed that the group’s fighters had also taken part in fighting in South-Eastern Ukraine on the side of the self-declared Donetsk and Luhansk People’s Republics.

According to Fontanka, “Wagner” is Utkin’s call sign. The Group’s commander is a reserve officer and previously served in the Pskovsk Brigade of the GRU. In December 2016, Utkin was invited to a reception to celebrate Heroes of the Fatherland Day in the Georgievsk Hall of the Great Kremlin Palace. Kremlin Spokesperson Dmitry Peskov confirmed that Utkin was present at the reception. “He was really there. He was a cavalier of the Order of Courage, and was from the Novgorod province,” Peskov said.

Both Utkin and Concord Management and Consulting were placed on the US sanctions list in June 2017. As the US Finance Minister said at the time, the sanctions were introduced “in accordance with the obligations to find diplomatic ways to deal with the crisis in Ukraine and promote the return of Crimea to Ukraine”.