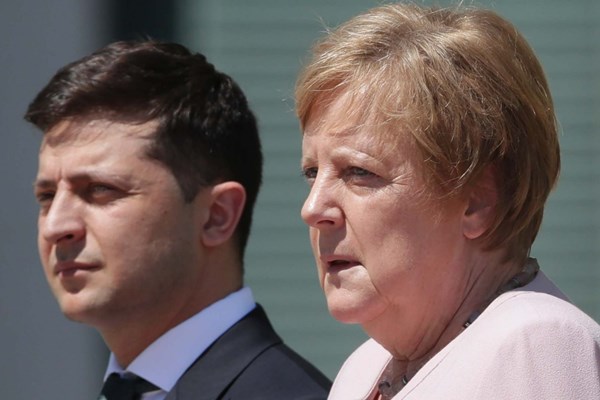 Ukrainian President Volodymyr Zelensky said that he intends to meet with German Chancellor Angela Merkel and discuss with her the Nord Stream 2 gas pipeline.

"Tthere will be an important meeting with Mrs. Merkel on energy security not only for Ukraine, but also for Europe. Thanks God that Europe does not feel these threats yet," Zelensky said at a press conference with Lithuanian President Gitanas Nauseda in Vilnius.

The Ukrainian President stressed that security, not the economy, should be the priority in the issue of Nord Stream 2.

"The balance between security and defence is difficult to find. It seems to me that North Stream is a litmus test that shows what the priority is for certain countries. When you don't feel you're in danger, you think about the economy. When you have a war, you think first of all about people's lives," said Zelensky.

The U.S. President Joe Biden decided not to impose sanctions against Nord Stream operator, so as not to spoil relations with Germany. The U.S. administration explained that at the state when the pipeline is almost completed, it no longer makes sense.

At the same time, it was reported that the U.S. and Germany plan to compensate Ukraine for the loss of revenue for the transit of Russian gas after the launch of the Nord Stream 2 pipeline. The parties must reach an agreement before Angela Merkel's visit to the United States on July 15.

The Nord Stream 2 project involves the construction of two pipelines with a total capacity of 55 billion cubic meters per year which will connect the Russian coast through the Baltic Sea to Germany. Work was suspended in December 2019 after Swiss Allseas refused to lay pipes due to possible U.S. sanctions. Since December 2020, construction of the pipeline has been resumed after a year-long pause. Nord Stream 2 is currently 95% completed.