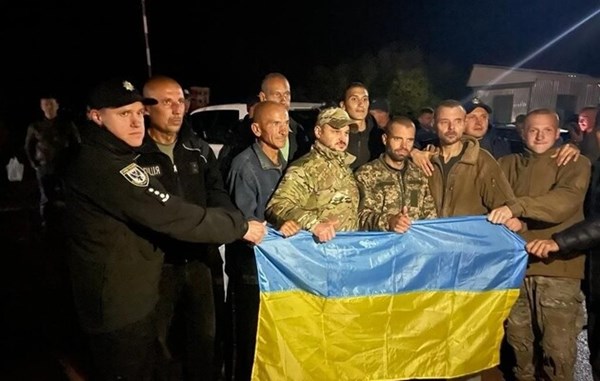 215 Ukrainian servicemen, including 124 officers, were released from Russian captivity. The exchange took place in Chernihiv region. The head of the office of the Ukrainian Presidential Administration, Andriy Yermak, reported that 200 servicemen of the Ukrainian Armed Forces were released in exchange for one pro-Russian politician Viktor Medvedchuk. As part of another exchange agreement, five Ukrainian military commanders from Azovstal steel plant in Mariupol were exchanged for 55 Russian prisoners who, as Yermak said, presented "no interest" for Ukraine. According to some reports, among the Russians were two senior officers (lieutenant colonel and major) and six junior officers. The Russian side has not yet officially commented on the prisoner exchange.

Among the Ukrainians who returned home are the famous commanders of the Azov regiment Denis Prokopenko and Svyatoslav Palamar, Azov medic Kateryna Polishchuk, also known as Ptashka, and Mikhail Dianov from Ternopil, whose photos taken in Azovstal became famous around the world. Ukrainian military medic Maryana Mamontova, who was pregnant when she was imprisoned, and the head of the patrol police of Mariupol Mikhail Vershinin also returned home.

The pro-Russian leader of the Ukrainian party "Opposition Platform - for Life" Viktor Medvedchuk is a close friend of Vladimir Putin. He was under arrest in Ukraine on charges of treason. In addition, in 2021, he was charged with attempted "plundering of national resources."

According to the Telegram channel Insider UA, five released Azov commanders will be in Turkey under the protection of Turkish President Recep Tayyip Erdogan until the end of hostilities in Ukraine.

Speaking to reporters in New York, Erdogan said that the exchange of prisoners between Russia and Ukraine was the result of negotiations between Vladimir Zelensky and Vladimir Putin with the mediation of Turkey and is an important step towards ending the war. He added that Ankara continues to make efforts to achieve peace between Moscow and Kyiv.

Earlier, the authorities of the so-called Donetsk People’s Republic released five British citizens who fought on the side of Ukraine, two US citizens, as well as citizens of Morocco, Sweden and Croatia. Three of them - Britons Shaun Pinner, Aiden Aslin and Moroccan Brahim Saadoun - were facing a death penalty. The release of captive foreigners was made possible thanks to the mediation of the Crown Prince of Saudi Arabia, Mohammed bin Salman. The video with Pinner, Aslin and Brahim was published on Twitter by the state news agency of Saudi Arabia, where the released were taken from Russia.

The United States thanked the president and government of Ukraine for adding American citizens Alexander Drueke and Andy Huynh to the exchange list, and the crown prince and the government of Saudi Arabia for facilitating this exchange. "We look forward to our citizens being reunited with their families," U.S. National Security Adviser Jake Sullivan wrote on Twitter.