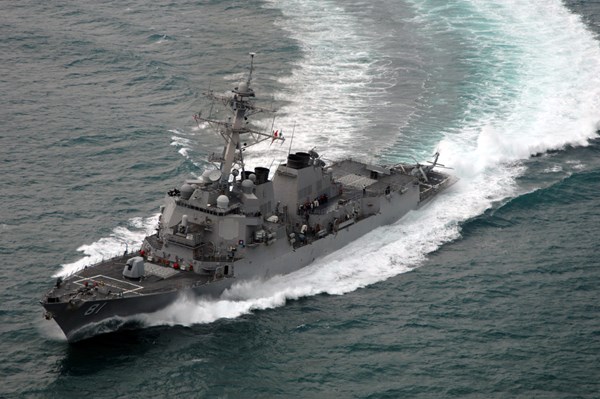 According to the command of the 6th Fleet of the United States, Destroyer USS Winston S. Churchill joined the Mediterranean group of ships of the US Navy. The ship carries several dozen cruise missiles.

The US Navy reported on Twitter on April 5 that the destroyer deported from the Norfolk naval base. At that time, it was going to join the 5th Fleet which is based in the Indian Ocean.

The destroyer, with a displacement of about 7,000 tons, is equipped with the Aegis system. It can carry more than 90 cruise missiles, including high-precision Tomahawk missiles. This is already second American destroyer, which has entered the Mediterranean Sea in recent days. A destroyer of the same type, USS Donald Cook, was previously deployed near the coast of Syria.

The USS Normandy, Arligh Burke, Bulkeley, Forrest Sherman and Farragut missile destroyers also set off to the shores of Syria from the Norfolk base.

The forces of other NATO countries, in particular the French frigate Aquitaine, also operate in the Mediterranean Sea. On April 10, it was reported that Russian aircraft approached four the USS Donald Cook at least four times. In the evening of April 11, the satellites also recorded Russian ships leaving the Tartus naval base in Syria.