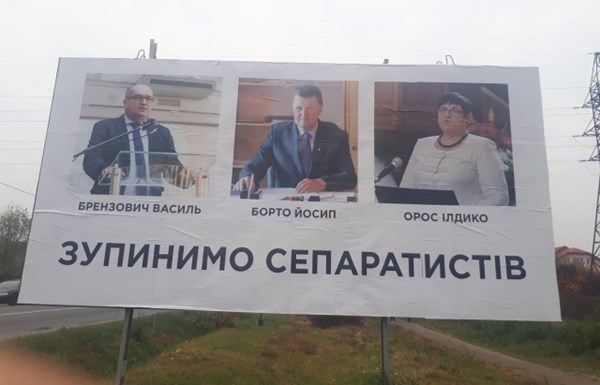 Billboards showed up simultaneously in several regions of Ukraine’s Zakarpattia province with a picture of the leaders of the Zakarpattia Hungarian Cultural Association (KMKS) and the inscription “Let’s stop the separatists”.

Local police are searching for the people behind the provocation, said Hennadiy Moskal, Chairman of the Zakarpattia Regional State Administration.

“Law enforcement officers are currently searching for the direct perpetrators of the provocation, but the methods and style of execution indicate that this is another primitive special operation of the FSB, which has been trying to cause conflict between Ukrainians and Hungarians in Zakarpattia for many years,” Moskal’s press service cites him as saying.

Moskal clarified that mistakes had been identified on the billboards, which was also the case with previous provocations.

“In April last year, on the administrative border of the Vynohradiv and Berehove regions, boards with provocative inscriptions in the Hungarian language were also put up on the same night. Incidentally, the inscriptions had been made with errors, just like the current ones, loaned from the Russian language. In February this year in Uzhhorod, they set fire to the KMKS office on two occasions. We have solved these crimes, and determined that the Russian intelligence services are behind them. It has already been shown that such primitive things don’t work in Zakarpattia, the Ukrainians don’t buy them, and neither do the Hungarians,” Moskal observed.

Mukachevo.net, citing sources in the KMKS party in the Zakarpattia provincial council, reported that the party would be convening an extraordinary session in order to make an official request to the Ukrainian government to stop the attacks on the Hungarian minority.

There has been conflict between Ukraine and Hungary for more than a year due to the Hungarian minority in Zakarpattia. One year ago, Budapest officially objected to Ukraine’s law on the language of education, which it sees as a violation of the rights of the Zakarpattia Hungarians to receive education in their native language.

In September 2018, Ukraine-Hungary relations deteriorated even further when a video was released on the internet which showed Zakarpattia residents being issued Hungarian passports in secret. The Hungarian Foreign Minister said that what the video shows is completely legal and is in line with international norms.