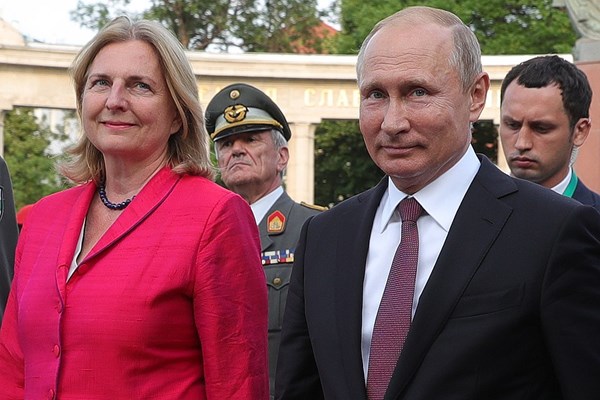 Mangott believes that the upcoming visit will cause people to suspect that Austria is “Russia’s Trojan horse in the EU”. The political scientist also says that Putin is being given an opportunity to demonstrate that he is not in isolation, and is even welcomed into an EU member state.

Several hundred police officers and Cobra special forces will be used in order to ensure the Russian president’s security in the federal state of Styria. Styrian police spokesperson Franz Grundnig explained such measures in light of the Security Police Act and the obligations of international law. He confirmed that the security costs will be covered by the Interior Ministry.

The Austrian media have drawn attention to the fact that Putin’s last visit to Vienna two months ago cost Austrian taxpayers € 423,000.

The Austrian Foreign Ministry spokesperson called the Russian president’s visit a “work visit”. According to him, such security measures “are taken when representatives of another country visit”. Russia “will pay its own expenses independently,” he noted.

Costs pertaining to the wedding celebration, “including expenditure on the services of a private security company,” will be born by the bridal couple.

The Foreign Ministry also emphasized that it will be a “personal visit to a private celebration, which does not indicate a change in Austria’s foreign policy position”.

If the head of the foreign policy department “does not do this willingly”, then Austrian Federal Chancellor Sebastian Kurz should propose his resignation to President Alexander Van der Bellen, Reimon stressed in an interview with the Austrian Press Agency.

Austrian opposition party Pilz List has criticized both the fact that taxpayers will have to pay for the important guest’s wedding attendance, and the political aspect.

“How should the world perceive Austria as a mediator if the Austrian foreign minister and the Russian president evidently already have close relations?” asked Austrian MP Bruno Rossmann.

The Austrian foreign minister’s wedding, to be attended by the Russian president, will take place on August 18. Later that day, Putin will be received by German Chancellor Angela Merkel. The meeting will take place in the Schloss Meseberg – the German government residence, located not far from Berlin. The topics of discussion will be “current foreign policy matters” - the war in Syria, the conflict in eastern Ukraine, and matters pertaining to the energy sphere, such as the Nord Stream 2 gas pipeline.