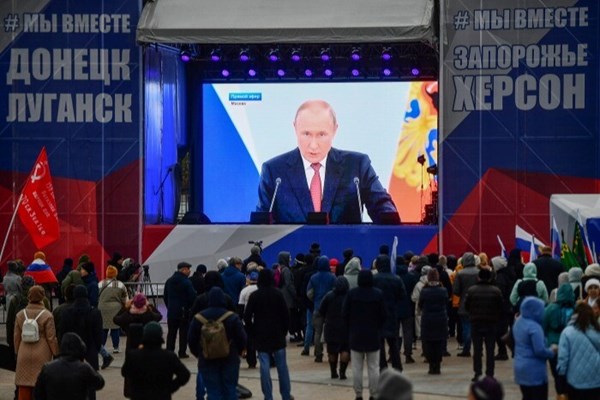 The so-called Donetsk and Luhansk People’s Republics will become part of the Russian Federation within the borders of 2014, the borders the Kherson and Zaporizhzhia regions will be established after discussions with the residents of the regions, said Kremlin spokesman Dmitry Peskov at a press conference.

"We have got some clarity," Putin's spokesman told reporters. “I will tell you in less legal language: the LPR and the DPR are within the borders of 2014. Kherson and Zaporizhzhia - we will continue to consult with the population of these regions."

When journalists tried to clarify whether there is an unambiguous answer to the question about the borders, Peskov said: "This is now an unequivocal answer. We will continue to consult with people who live in these areas."

The journalist started asking for clarification whether the areas of Kherson and Zaporizhzhia regions, which are under Ukraine’s control, can be considered the territory of Russia.

"I have nothing more to add now," Peskov replied.

"Then in what form will the issue of borders continue to be discussed with the population of Kherson and Zaporizhzhia regions?" the journalists asked.

"Now I can't answer your question," said Peskov. "Of course, in any case, any configuration will depend only on the will of the people who live in a particular territory."

When asked if new referendums were planned in the Kherson and Zaporizhzhia regions, Peskov said: "Not yet."

Journalists also asked to clarify whether there will be greater certainty regarding the borders by the time Russian President Vladimir Putin signs the decree on the accession of new territories into the Russian Federation, Peskov said: "No, I think the wording will remain the same."

His answer to the question "Should we expect clarification about the borders after the signing of the laws?" also did not add clarity. "Once again, I would refer you to the wording that I already use," Dmitry Peskov summed up.

At the same time, the Chairman of the State Duma Committee on State Building and Legislation, Pavel Krasheninnikov, confidently stated that the Kherson region will become part of the Russian Federation and include the Snihurivka and Oleksandrivka districts of the Mykolaiv region of Ukraine.

"As for the Kherson region, the borders will also be determined by administrative boundaries, taking into account the decrees of the military-civil administration of the Kherson region of September 20," Krasheninnikov said at a meeting of the committee he heads. "Here, Kherson Oblast includes The Oleksandrivka and Snihurivka Municipal districts of Mykolaiv Oblast."

The deputy explained that these areas today are within the boundaries of the Russian version of the Kherson region, since "a referendum was also held there."

According to Krasheninnikov, in relation to the Donetsk and Luhansk regions, their borders will be determined in accordance with the constitutions of the DPR and LPR.