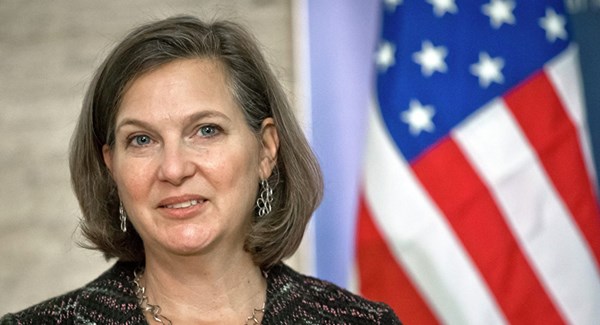 Washington excluded some Russians from the sanctions lists in exchange for the Kremlin allowing the visit of the US Under Secretary of State for Political Affairs Victoria Nuland, said the spokesperson of the Russian Foreign Ministry, Maria Zakharova, on the talk show "Sunday evening with Vladimir Solovyov" on the TV channel Rossiya 1.

"She (Nuland) was really on the sanctions lists. This implies that a person cannot cross the border. They included Russian representatives and international affairs members in their sanctions lists. Therefore, in this case, this issue (Nuland’s visit) was resolved on a parity basis, "said Zakharova (quoted by RIA Novosti).

When asked whether the United States lifted restrictions on Russian representatives in response, Zakharova confirmed that. She did not specify who exactly was removed from the U.S. sanctions list.

The fact that Nuland is on the Russian blacklist became known in May 2019, when she was denied a visa. The Russian Foreign Ministry said that the list was compiled in response to the introduction of personal visa and financial sanctions by the United States against a number of Russian officials.

At the end of September, Kommersant reported that Moscow would give permission for Nuland's visit if Washington in response issued visas to Russian diplomats who had previously been denied entry to the U.S. In particular, the newspaper wrote, Russia demanded to remove restrictions from the representative of the Department of Non-Proliferation and Arms Control of the Russian Foreign Ministry Konstantin Vorontsov, who is responsible for multilateral disarmament. The official was expected to travel to the UN headquarters in New York but has not been able to obtain a visa since the fall of 2019.

Nuland will arrive in Moscow on October 11. She will meet with diplomats and officials at other agencies "to discuss a range of bilateral, regional and global issues," the State Department said. In particular, she is going to hold talks with Deputy Foreign Minister Sergei Ryabkov, Zakharova later specified.

Deputy head of the presidential administration Dmitry Kozak will also meet with Nuland, Kommersant wrote. The main topic of the talks will be Ukraine.

Nuland has been working intermittently at the U.S. State Department since 2010. In the administration of Barack Obama, she oversaw, among other things, relations with Ukraine during the events of the Euromaidan in 2013-2014. During the presidency of Donald Trump, she headed the Center for a New American Security (CNAS), and after the victory of Joe Biden, she returned to work at the State Department.