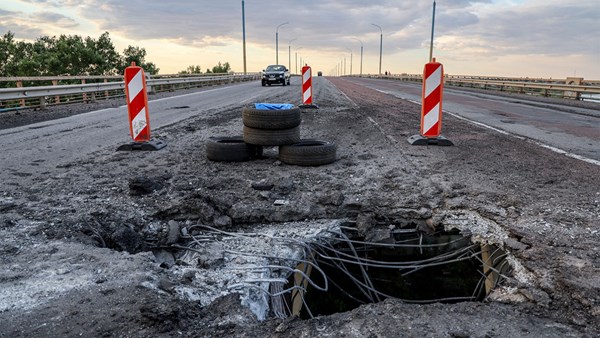 Strategic bridges in the Kherson region are unsuitable for transportation of heavy equipment, three pontoon crossings of built by Russians were also destroyed, said the head of the joint press center of the Ukrainian Defense Forces South, Nataliya Gumenyuk.

She noted that the bridges in the southern part of the country are under fire control of the Ukrainian Armed Forces. The Ukrainian troops, according to Gumenyuk, do not destroy infrastructure, but also do not provide the Russians with the opportunity to use these bridges for their purposes.

"That is, the strikes that were inflicted on these targets are eloquent enough that these objects are not used. But the occupiers continue to do so, even though it is associated with a risk to life. They continue to try to smuggle heavy equipment and ammunition despite the risks. This led to the destruction of certain sections (the Kakhovka Bridge), since it could not withstand such loads, " said Gumenyuk, noting that at the moment all bridges are impassable and that is why Russian troops are setting up alternative ways - ferry, pontoon and barge crossings. But they are also under the fire control of the Ukrainian Armed Forces.