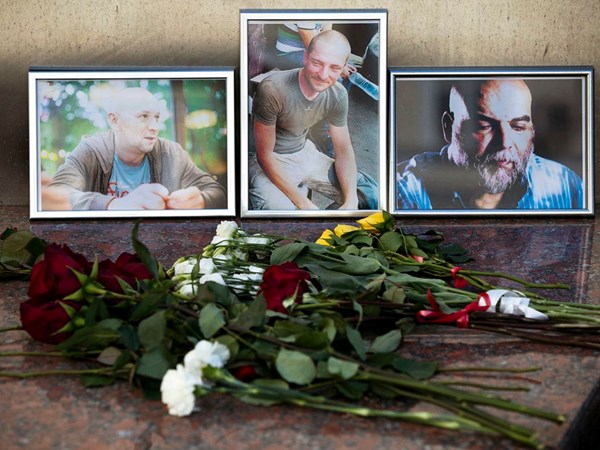 In the Central African Republic (CAR), an investigation is currently underway into the deaths of a film crew from Russia. On Thursday a Gendarmerie investigative group examined the murder scene and questioned local residents. The details of the attack have also been published in the local media. According to the local online news outlet Corbeau News (CNC), the members of the film crew appear to have understood what their assailants were telling them during the attack.
According to CNC, the Russian journalists planned to visit the city of Kaga-Bandoro. The UN mission to the CAR is located in this city, but a significant part of the region is controlled by the Muslim insurgent movement “Séléka”. The journalists had reportedly made contact with “several rebel leaders”.

“When they arrived in the town of Sibut last Monday, they met soldiers of the Central African Armed Forces (FACA) 5 km from the town. Since they were familiar with the terrain, the soldiers advised them not to travel at night, but the journalists phoned one of their compatriots and then said that there was no real danger on the route, and that they could go. Since they insisted, the soldiers let them leave between 23:27 and midnight,” CNC writes.

The car, which was being driven by a local, was stopped by an armed group 18 km from the FACA roadblock. The journalists were killed, their driver was wounded but survived.

The surviving driver, who was questioned, said that the assailants spoke a language other than French or Sango (the national language of the CAR).

“Strangely, the three journalists appeared to understand well what their assailants were saying to them,” the CNC article observes.

The author of the CNC article believes that the killing was planned, and was not carried out by local armed groups. “Only God knows the truth of this matter,” the article concludes philosophically.

Independent journalist Gaël Grilhot, in collaboration with the French news outlet Le Monde, who arrived in Bangui two weeks ago, said that the roads in the CAR are extremely dangerous to move about on. “Officially the government controls only 20% of the territory, but even if one often encounters FACA patrols and the UN mission in this area, there are lots of bandits everywhere and roadblocks by armed groups of every kind,” he explained. “It was extremely careless to leave the city at night, like our colleagues did,” the journalist believes. “It’s still too early to rule out any of the hypotheses,” he adds.