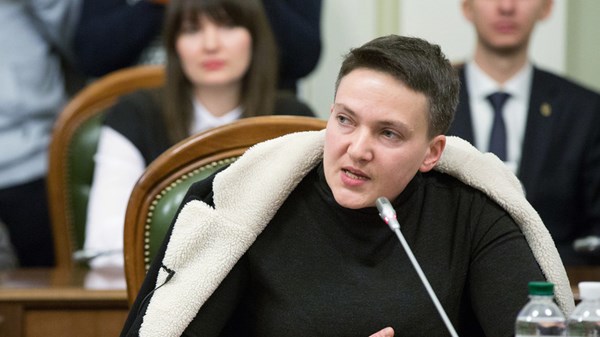 The decision to prosecute a Deputy of the Verkhovna Rada of Ukraine, Nadiya Savchenko, was supported by 291 deputies, 277 of the people’s representatives voted for her detention, and 268 for her arrest. Savchenko was officially read the complaint claiming offenses she committed and was accompanied to the Directorate of the Security Service of Ukraine (SSU) in Kyiv.  The press service of the General Prosecutor’s Office of Ukraine informed that a court session will take place on March 23rd to decide on which preventive measure will be made for the suspect.

Nadiya Savchenko, is a career officer of the Armed Forces of Ukraine.  Since the beginning of the Russian aggression in the Donbas, she fought with the Aidar volunteer battalion in the Luhansk region.  In June 2014 Savchenko was taken captive and transferred to Russia.  The Donetsk city court of the Rostov region found her guilty of murder and attempted murder and sentenced her to 22 years imprisonment. In 2016, Savchenko was exchanged for Russian Special Forces soldiers convicted in Ukraine. During her stay in Russian prisons, Nadiya became a national hero and was elected as a Deputy of the Verkhovna Rada of Ukraine from the Batkivshchyna Party (Fatherland) led by Yulia Tymoshenko and is also a delegate to the Parliamentary Assembly of the Council of Europe.

After her triumphant return to Ukraine on May 25, 2016, her first steps in the political field were to visit the areas of eastern Ukraine which are under control of pro-Russian separatists, and made contact with their leaders, which was a surprise to Ukrainian citizens.  Savchenko quickly turned from a national hero to a scandalous political character, but against the background of the many problems of the belligerent country, she did not attract much interest.

In early March, 2018, Savchenko became the focus of media’s attention again as a result of the detention of the head of the center of the prisoner release Officers Corps, Volodymyr Ruban, on the boundary line in the Donbas with an arsenal of weapons in his possession. Law enforcement agencies accused Savchenko of colluding with Ruban, smuggling weapons from the territories controlled by separatists to carry out an attack against the Verkhovna Rada, and preparing a coup d’etat.
After the first charges, Savchenko actively denied her involvement in the plot.  However, before the consideration of the General Prosecutor Office’s view of her arrest, Nadiya’s mood changed dramatically. Her sister Vira informed that Nadiya came to the Rada being ready for her possible arrest and “packed a bag with things necessary in prison.”

On the sidelines of the Parliament, representatives of the pro-president factions - the Petro Poroshenko Bloc and the People’s Front party – did not conceal the fact that they will support all three of the Prosecutor General’s, Yuriy Lutsenko’s positions regarding Savchenko. Deputies of the opposition parties are ready to accept the removal of Nadiya’s parliamentary immunity, but will speak out against her detention and arrest. Deputies from the pro-Russian faction, the Opposition Bloc, were going to vote against all three paragraphs. “We are ready to support the removal of her immunity, but not to vote for individuals every week,” the Co-chair of the faction, Yuriy Boyko stated.

The report of the Prosecutor General, Yuriy Lutsenko, was emotional and substantive. He stated that Nadiya Savchenko and Volodymyr Ruban tried to induce officers of one of the regiments of the Special Forces of Ukraine to attack Government agencies and the Parliament in Kyiv in order to seize power. “The perpetrators planned to set grenade launchers on Trukhaniv Island or on the barge on the Dnieper River to shoot into the center of Kyiv. It would be a terrorist attack to bring down the Ukrainian State,” Lutsenko stated and accused Savchenko of an intention to personally commit an act of terror in the hall of the Rada.

As proof, he offered a video provided by the Main Intelligence Directorate and Security Service of Ukraine that recorded the collusion attempt between Savchenko and Ruban with Ukrainian servicemen.  The first two attempts to show the video failed and were accompanied by mocking outcries of people’s deputies.  But after watching the video there was no one in the Conference room of the Verkhovna Rada who would defend Savchenko.

Nadiya watched the video with an ironic smile. Speaking after this from the rostrum of the Rada, she criticized the current authorities for “utility and price terrorist acts” against the Ukrainian people.  Savchenko demonstrated her award – the star of a hero of Ukraine - and said that she will never give it to anyone else. “I proved that I am a hero of Ukraine in Moscow’s prisons against the external enemy, I will also prove to you, internal enemies of Ukraine what a hero of Ukraine is,” she stated.

A political scientist from Kyiv, Viktor Nebozhenko, believes that the Criminal proceedings against Nadiya Savchenko and Volodymyr Ruban may lead to nothing.

“The authorities are themselves afraid that they raised the subject of the coup d’etat. The accusations against Savchenko are constantly changing, and outcomes are not predictable,” the expert believes.

In contrast, the head of the Center for Applied Political Studies, "Penta" Volodymyr Fesenko, assumed that the case against Savchenko will be   brought to trial but not in 2-3 months as the Prosecutor General promises, but closer to the Presidential elections in Ukraine in spring 2019. Fesenko suggested that the Savchenko factor will become a political strategy for the election campaign team of the current President, Petro Poroshenko. He does not exclude that Poroshenko’s team will try to lower the rating of his main competitor Yulia Tymoshenko with the help of Savchenko.