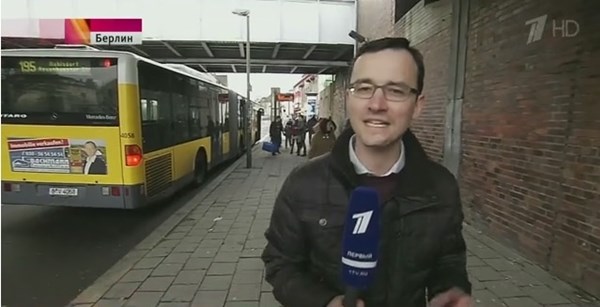 Berlin prosecutors began a preliminary investigation into Ivan Blagy, a correspondent for Russia’s First Channel. This was reported to DW on the 7th of February by German lawyer, Martin Luithle. Luithle’s application for verifying the legitimacy of one of Blagy’s stories formed the basis of a criminal case.

The story in question is about the alleged kidnapping and rape of a 13-year-old Russian-speaking young girl known as Lisa F. These alleged crimes occurred in Berlin and were reportedly committed by migrants from Arab countries.

According to Luithle, the prosecutor's office informed him that they are starting the investigation, meaning that the office is “studying the provided evidence.” With regard to Ivan Blagy, there is just “mere suspicion”, which in Germany is necessary to start an inquiry.

In January, Luithle appealed to Berlin's Prosecutor's Office to verify the legality of the story which aired on First Channel. He told DW that the story is filmed in the spirit of Russian propaganda and aids in the formation of ethnic hatred.  According to Luithle, Blagy faces anywhere between three months and five years in prison for his actions.

A representative of Berlin's Prosecutor's Office, Martin Steltner, later reported that the case of Lisa F. has been disclosed. According to the authorities, within 30 hours of the girl's disappearance, there was “neither rape, nor any sexual activities” committed.

On the 11th of January, the night of her disappearance, the girl was reportedly hiding from her parents at her friend’s house.

There is also a case of sexual abuse committed against Lisa F. prior to the 11th of January, which is currently being investigated by the prosecutor’s office.  This case involves two men of Turkish origin.