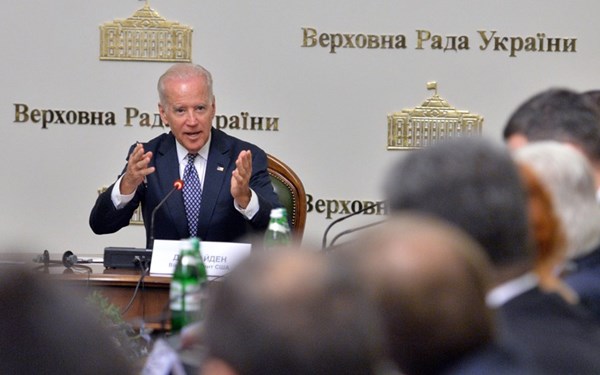 In his passionate speach to Ukrainian parliament U.S. Vice President Joseph Biden urged Ukraine to seize the opportunity to become a truly democratic nation that removes the blight of corruption. He also directly accused Moscow of sending troops to fight with pro-Russian separatists in eastern Ukraine and trying to hide that action from the Russian public and the world. Mr. Biden assured Ukraine of the U.S. continuous support as long as it stayed on the democratic path.
He said: "Once again, standing in the face of Russian aggression and widespread corruption, Ukraine has another — and what might be its last — historic opportunity to establish a true, free, economically prosperous democratic republic. One that can’t be bullied, bribed, or bought. So long as the people of Ukraine continue to strive for freedom and democracy, they can count on the unwavering commitment of the United States to stand with them."
Biden recalled the sacrifices of the EuroMaidan Revolution in which more than 100 people were killed and many others wounded.

Mr. Biden said to Ukraine's parliament that Western pressure on Russia will increase if Moscow continues its "aggression" against Kyiv. He said "the United States will never recognize" Russia's annexation of Crimea. He called " for aggressors around the world to understand they can't use coercion, bribery, sending tanks and men across the border to extinguish the dreams of a people"