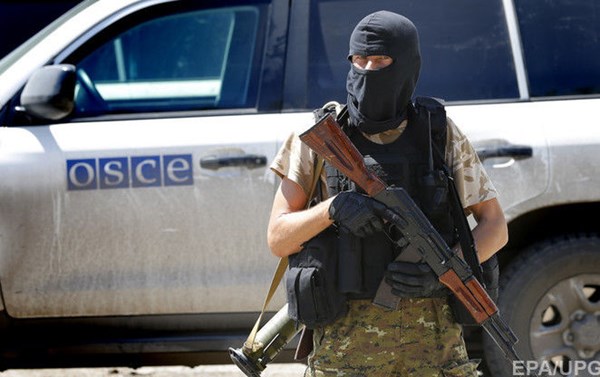 The Organization for Security and Cooperation in Europe’s Special Monitoring Mission to Ukraine (SMM) reported on Friday that a group of their observers was detained by pro-Russian separatists of the so-called Donetsk People’s Republic (DPR) near the city of Horlivka, 40 kilometers northeast of Donetsk.

“In Horlivka… armed ‘DPR’ members stopped an SMM patrol and forced the SMM monitors to the ground. The SMM vehicle was searched for video material and SMM monitors were taken to a ‘military-type building’. Upon arrival of a ‘DPR’ ‘commander’, who apologized for the situation, the monitors were released after 35 minutes,” the OSCE stated in a report.

The OSCE’s mission has found it increasingly difficult to gain access to areas controlled by the so-called People’s Republics in the Donbas region, and as a result the OSCE’s ability to carry out its mission to monitor the fragile ceasefire in eastern Ukraine is severely compromised.

Last month, Deputy Chief Monitor of the OSCE’s SMM to Ukraine Alexander Hug explained that “In what is now a near systematic practice, armed members [pro-Russian separatists]… have been insisting on unspecified authorization… We always had problems going through these checkpoints, but until now a call to people higher up on the chain was usually sufficient to resolve the situation.”

The OSCE cited several other instances on Thursday in which “DPR” members denied access to the SMM to certain areas, primarily those around the village of Kominternove. Similarly, monitors were denied access to the city of Chervonopartyzansk by members of the so-called Luhansk People’s Republic.

The OSCE also reported four instances of ceasefire violations involving small arms fire on Thursday in separatist-held areas. Recently, the parties of the conflict agreed to a sixth ceasefire that was to begin on the night of December 23, though violations of this agreement occur daily, as both Russian-backed separatists and the Ukrainian Armed Forces accuse the other of violating the terms agreed to in Minsk last month during the meetings of the Trilateral Contact Group.