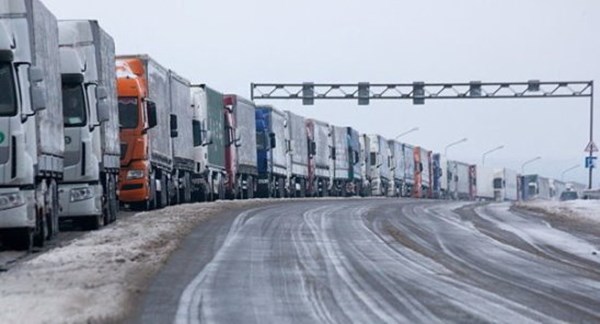 In the Krasnodar Krai of Russia, long-distance truck drivers blocked the road leading to a car ferry to the annexed Crimea, as was reported by the Crimean media on the evening of February 16th.

The Crimea-inform website, a mouthpiece for the Crimean government, reports, citing a witness to the incident, that the trucks blocked traffic near the village of Ilyich. The truckers are protesting the long wait time for the ferry to the Crimea.

"Using their trucks, drivers completely blocked the road leading to the Kerch ferry. It happened around 6 p.m. near a traffic police post in Ilyich. At 6.30 p.m., a five-kilometer traffic jam had already formed on the road," the eyewitness said.

According to information from another Kerch website, the truckers were forced to wait in line for the ferry for three to four days. Many of them had perishable goods. At the same time, according to eyewitnesses, on the evening of February 16th, the Boris Shtokolov ferry departed from Port Kavkaz half empty. Only 17 trucks were loaded although the ferry has the capacity to transport 27 trucks.

Eyewitnesses also report that Port Kavkaz does not only let trucks board, but other vehicles as well, including passenger cars.

It is reported that extra police forces and local authorities are heading to the location. Meanwhile there are no official comments on the incident.

Due to the ice formations in the Sea of Azov and the movement of ice along the Kerch Strait, only three ferries were left on the ferry line. They are the Crimea, the Yeysk, and the Boris Shtokolov ferries. As a result, there are more than 1,000 trucks waiting at Port Krym and Port Kavkaz.

The ferry across the Kerch Strait is the major transportation artery that connects the Crimea with the Krasnodar region of Russia. According to Ukrainian legislation, entry to the Crimea through the Kerch passage is forbidden and is a violation of the border crossing laws.