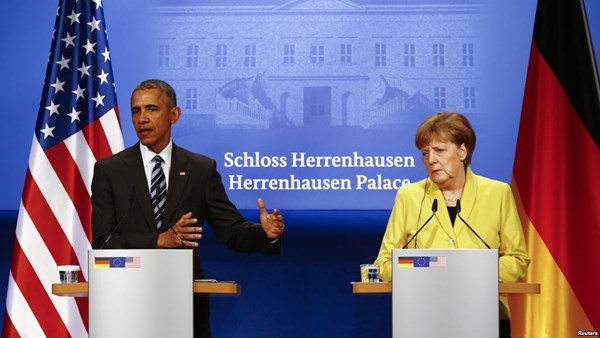 US President Barack Obama said that he and German Chancellor Angela Merkel have a common stance on sanctions against Russia because of its policy with regard to Ukraine: sanctions can only be lifted if Moscow fulfills the conditions of the Minsk Agreements. Obama said this on April 24th at a press conference in Hannover, after a meeting with Merkel as part of his 6-day trip abroad.

"Sanctions against Russia can and should be lifted only if Russia fulfills its commitments within the framework of the Minsk Agreements," Obama said.

In turn, Merkel said that the ceasefire in eastern Ukraine was not stable and that they, together with the American President, discussed ways of implementing the peace agreements.

"We still don't have a stable cease-fire, and we need to move the political process. We discussed in detail the necessary next steps," Merkel said.

Speaking at a press conference, Obama also called on the warring parties in Syria to return to peace talks. "I spoke with Russian President Vladimir Putin earlier this week trying to convince him that we can restore the cessation of hostilities," Obama stated.

Earlier on Sunday, he said that the territory controlled by the so-called Islamic State can be reduced, and it is possible to expel radical Islamists from the major cities of Mosul in Iraq and Raqqa in Syria. Obama also said that it would be a mistake for the United States, Britain and other Western countries to use ground troops to topple Syrian President Bashar al-Assad, who is an ally of the Kremlin.

Obama arrived in Germany to promote a new trade deal with the EU and participate in a summit with key European leaders on April 25th.

The White House said that during the summit with Angela Merkel, the leaders of France, Britain and Italy will be discussing efforts on combating terrorism following the attacks in Paris and Brussels, the military operations against the Islamic state in Iraq and Syria and the refugee crisis in the EU and the situation in Libya.

The visit to Germany is the last stop in President Obama’s a six-day trip, in which he sought to strengthen ties with American allies to fight Islamist militants, stop Russia's aggression against Ukraine and stimulate international trade.